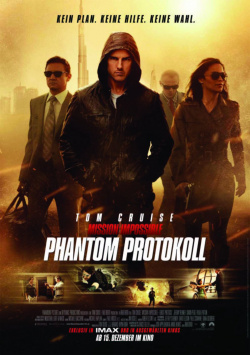 Dear Movie Fan. Your mission, should you agree to it, is to visit the fourth installment of Mission: Impossible. Why? Read quickly, because this review will self-destruct within five seconds. No, of course you can sit back comfortably, and read at your leisure all the reasons to go see the fourth cinematic mission of Tom Cruise aka Ethan Hunt.

Mission: Impossible - Ghost Protocol begins with a spectacular mission to free the imprisoned Ethan Hunt (Tom Cruise) from a prison in Russia. His team, made up of Jane Carter (Paula Patton) and Benji Dunn (Simon Pegg), has no idea that Hunt was in prison as part of a dangerous mission to obtain crucial information that could secure peace between world powers. That information leads the team straight to the Kremlin, where they are tasked with stealing vital codes before they fall into the hands of a terrorist group led by a mysterious mastermind (Michael Nyqvist). But the mission goes awry and Hunt and his team are lured into a trap. A bomb attack on the Kremlin is blamed on them. As a result, the IMF is disbanded and Jane, Benji and Ethan are branded terrorists and sought by police and intelligence agencies worldwide. With the help of agent Brandt (Jeremy Renner) the team wants to redeem themselves without any backing from their government and incidentally save the world. In Dubai, they could strike the decisive blow against their enemies - but this mission soon proves to be more impossible than thought...

With Mission: Impossible - Ghost Protocol, Brad Bird, director of animated films such as The Giant from Outer Space or The Incredibles, delivers his live-action film debut, which he directed with the help of producer J.J. Abrams, the director of the third part. Shot in Los Angeles, Moscow, Prague, Dubai, Mumbai and Vancouver, the action thriller has an almost classic flair to it, despite numerous contemporary special effects and daredevil action interludes, which adds a very special touch to the overall thrilling experience.

Spiced with a proper pinch of humour, for which Simon Pegg, thankfully more prominently represented in this installment, is primarily responsible, the exotic locations, the mysterious villains (Michael Nyqvist, lead actor of the Millennium trilogy and an ice-coldly beguiling Lea Seydoux), the fast-paced chases and the spectacular stunts make the fourth Mission: Impossible popcorn cinema of the very special kind worth watching. In particular, the sequence set on the facade of the Burj Khalifa skyscraper in Dubai is absolutely breathtaking.

Of course, some parts of this scene were shot on a studio replica. However, a few shots, including a very dangerous fall, were staged on location with the most extreme of efforts. You may think what you will of Tom Cruise, who didn't miss the chance to climb around the facade of the skyscraper himself, of his private escapades and views. As an action hero, the man is top notch. Whether at lofty heights, in a modern parking garage, in a straight-up duel, or in the midst of a prison riot, Cruise consistently cuts a fine figure as Ethan Hunt. Certainly, especially when he uses few words or spices his performances with a bit of self-deprecation, he can really convince. But also a short moment at the end of the film, in which Hunt is allowed to show a little emotion and vulnerability, proves that Cruise is a really good actor despite all justified criticism.

But also the team, what he was given in this film to the side, can be seen. While Simon Pegg serves as the comedic element as mentioned earlier, Paula Patton gets to show off her attractive as well as combative side. And Jeremy Renner, who was nominated for an Oscar for his performance in The Hurt Locker, with this performance and upcoming roles in The Avengers and the next Bourbe film, looks set to become not only a compelling character actor, but also a compelling action star.

Mission: Impossible - Ghost Protocol is actually fun from the first second to the last, never boring for a moment and providing the viewer with one adrenaline rush after another. Sure, the laws of logic are overridden here and there, but who cares when the result is so entertaining. No big head cinema, who is looking for pure entertainment on a very high level, should not miss this action thriller. Absolutely worth seeing