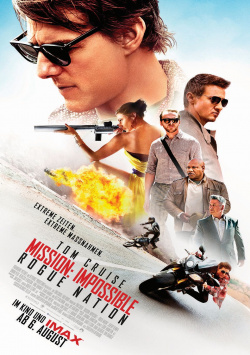 Ethan Hunt (Tom Cruise) and his team from the IMF are once again confronted with an impossible mission. They've just saved the world once again when the agency, which operates completely undercover, comes under fire from the CIA. Director Alan Hunley (Alec Baldwin) has made it his personal mission to disband the IMF and hold Hunt accountable for his sometimes reckless behavior. But at the same time, the agents get to deal with an even more dangerous foe: The Syndicate, a ruthless secret organization of rogue agents from around the world who have made it their goal to shake civilization as we know it to its foundations. And to do that, Ethan and his team must be taken out of harm's way. To prevent that from happening and save the world once again from an unseen evil, Ethan Hunt himself must rise above. For his adversary always seems to be one step ahead of him. In the mysterious Ilsa Faust (Rebecca Ferguson), he may have found a helpful comrade-in-arms - or a dangerous adversary who will deliver him and his team to the knife of the Syndicate...

The Mission: Impossible films are quite something. For it is exceedingly rare for a series to get better, not weaker, with each sequel. That doesn't happen in quantum leaps here, but rather in nuances. But these nuances make sure that each part offers familiar things again and again, but always varies them in an exciting way, so that they seem new and even a little surprising. This is noticeable for example in the constantly better harmonizing dynamic between the individual IMF members. The best example of this is Benji (Simon Pegg), who was introduced in part 3, and who in part 5 is no longer just sitting at the computer, but has risen to become a real sidekick for Ethan Hunt. And the interplay between the nerd and the action hero is just great and makes for some of the film's most amusing moments. But William Brandt (Jeremy Renner), who first appeared in Part 4, and Ving Rhames as Luther Stickell also come across as indispensable cogs in a perfectly functioning gearbox that, after all its adventures, has long since been held together by more than just professionalism. Even though Ethan Hunt is clearly the star of the film, Mission: Impossible - Rogue Nation would only be half as entertaining without the rest of the IMF team.

Naturally, a strong woman at Hunt's side can't be missing this time either. And with Rebecca Ferguson (The White Queen) the makers have landed a real lucky strike. Ferguson is not only a talented and extremely attractive actress. You also take the action lady from her every second. She doesn't come across as a fragile little doll who's been strung up on wires for a few cool kicks, but in reality would fall over if you so much as bumped into her. No, you really buy that she can punch hard, perform breakneck maneuvers on a motorcycle, and use her legs as weapons with a mix of deadly precision and grace. That being said, Ilsa Faust is a very interesting character who is a real asset to the franchise. Let's hope that she will be back in the already announced sixth part and not, as recently Paula Patton after a film again simply disappears without a trace from the scene.

Which has always distinguished the Mission: Impossible films, are the sometimes breathtaking stunts, the majority of which Tom Cruise always completes himself. And the fifth installment is no different. Whether he's hanging from an airplane, plunging down a water shaft, engaging in a breakneck duel with a killer above the stage of the Vienna Opera, or taking on Ilsa in a wild motorcycle chase, the audience is always treated to top-notch action entertainment with some great wow moments. But why the film ends up working so really well is the fact that the story doesn't get completely lost in all the action. Director and screenwriter Christopher McQuarrie, who has previously written Jack Reacher (which he also directed) and the great sci-fi thriller Edge of Tomorrow for Cruise, crafts a first-rate spy thriller here that's really exciting even in its quieter moments.

This is also due to the interesting villain, delightfully disgusting played by Sean Harris. Solomon Lane is far superior to Ethan Hunt intellectually, which leads to some unexpected twists and challenges that are extremely engaging and entertaining for the viewer. The whole thing is spiced up with a pleasant dose of humor, which in some scenes takes on wonderfully self-deprecating features - such as when a fight scene alludes to the rather small height of Tom Cruise. The fact that the film takes time for a little wink despite all the excitement and action, makes the entertainment value even higher.

Especially the fans of the series, who were thrilled by the parts 3 and 4, will be fully satisfied with Mission: Impossible - Rogue Nation. The film offers just perfect popcorn cinema: fast-paced action, an exciting story, some humor and great actors. Without a doubt the best part of the franchise so far and definitely one of the best action movies of the year. Absolutely worth seeing!