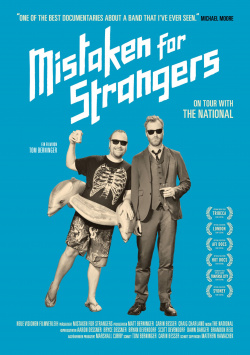 The band The National are one of the most sought-after indie rock formations of recent times. Their concerts are regularly sold out, successful magazines like GQ or Rolling Stone dedicate cover stories to them and their songs have been featured in TV hits like Game of Thrones or Grey`s Anatomy as well as in the movie hits The Tributes of Panem - Catching Fire, Forever Love or Til Schweiger`s Kokowääh. Matt Berninger is the singer of the internationally successful band. His nine years younger brother, the amateur horror filmmaker Tom, can only dream of such success. However, the music his brother makes is not really his thing, he is more of a metal head. Nevertheless, he gladly accepts the offer to accompany The National's next tour as a roadie. He not only hopes to finally spend some more time with Matt. He also wants to make a documentary about the band and their touring life on the side and thus prove his skills as a filmmaker.

But there are people in the crew who don't think this is a good idea from the start. So Tom's direct supervisor makes it clear to him right from the first conversation that he has a job to do here, that he is not a member of the band and that the tour is not a debauched party. At first Tom fulfills his duties very well, but takes more and more time to realize his film project. And he also finds it hard to give up alcohol. And so it doesn't take long for the first tensions to arise, not only with the crew, but also with his brother.

Mistaken for Strangers was supposed to be a pure music documentary and a portrait of The National. But in the end, the film has become much more. In addition to a very honest look behind the scenes of the music industry, the entertaining documentary also offers the very intimate, yet at times extremely amusing story of two unequal brothers who seem to drift further and further apart as they try to grow closer together again. At the same time the film is also the view over the shoulder of a chaotic filmmaker, who first has to drive completely against the wall, in order to be able to recognize his actual talent and his self-esteem.

The strong contrast between the well-dressed Matt, who usually also expresses himself very chosen, and the rather chavvy Tom, who wants to live out his idea of Rock`n`Roll on the tour, naturally provides for quite a few amusing moments. But what provides some hearty laughs at the beginning, reveals more and more the rather tragic side of the story of a young man, who since childhood has the feeling to be in the shadow of his big brother. Through his good-humour facade, Tom seems to want to hide the fact that he is slowing himself down by feeling that his brother will always be the star anyway, and that he doesn't believe in himself.

It is revelations like this that make Mistaken for Strangers just that, not just a fun tour diary, but a very interesting documentary. The film, which is quite short at just under 75 minutes, offers a very well-balanced basic tone and also has what must be some of the most absurd interview sequences in the history of music documentaries. Tom's questions to the band members (Do you carry a wallet on stage? Do you ever get sleepy on stage with your music? What kind of nightmares do you have?) and the reactions they elicit are just too delicious.

If you ever want to see what goes on behind the scenes during a tour, if you want to see a very human side of successful musicians, or if you're generally interested in entertaining documentaries, Mistaken for Strangers is definitely not to be missed. Despite a few little hangs, the bottom line is a very clear: Worth seeing!

Cinema trailer for the movie "Mistaken for Strangers (USA 2013)"
Loading the player ...