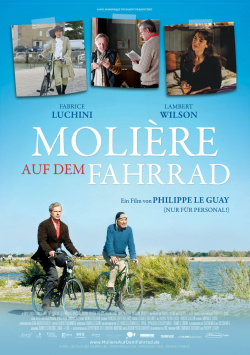 Molière on a bicycle

In the past, Serge Tanneur (Fabrice Luchini) was a celebrated actor whose whole passion belonged to the theatre. But those days are long gone. He now lives in complete seclusion on the Ile de R&eacute; and has vowed never to set foot on a stage again. He makes this clear to his former companion, TV star Gauthier Valence (Lambert Wilson), when the latter suddenly appears on Serge's doorstep and tries to persuade him to take part in his production of Moli&egrave;res The Misanthrope. But Gauthier doesn't let up, and the prospect of playing his dream role of Alceste after all softens Serge's heart. He agrees to spend a few days rehearsing the play with his old friend. If the feeling is right afterwards, he accepts the role. More and more Serge opens up again to the play and to his fellow men. When he meets the pretty Italian Francesca (Maya Sansa), everything seems to lead to a happy ending. But it is not only on the theatrical stages that things often turn out differently than one thinks.

Philippe Le Guay, who was also able to land a respectable success in Germany with his last film Nur für Personal, attempts in Moli&egrave;re auf dem Fahrrad to pay tribute to the classic Der Menschenfeind in two ways. For one, the work is central to the story, as it has always been a dream for both main characters to one day play the role of Alceste on stage. For another, the story itself is a kind of reinterpretation of Moli&egrave;res comedy. To be sure, the references to the Enemy of Man are generic enough that you can have fun with the film even if you don't know Moli&egrave;res classic. But only with the appropriate prior knowledge can the sometimes very tongue-in-cheek humor fully unfold.

However, even simply as a story about two old friends bonded by their love of the stage and trying to rekindle that bond, Moli&egrave;re on a bike works quite well. The two leads, Fabrice Luchini (Personnel Only, In Her House) and Lambert Wilson (Matrix 2 +3, Of Men and Gods), harmonize just great and the verbal battles the two keep having have a lot of wit and successful timing. To feel well entertained here, you really don't need to know The Misanthrope. It's only in the final act that a knowledge of the material really pays off. Because the more the two actors rehearse the play together, the more Serge internalizes the role of Alceste and the lines between stage and reality finally blur. His behavior in this part of the film will be difficult to understand for many a viewer unfamiliar with the Misanthrope, which of course takes away much of the intentional impact of the whole thing.

However, whether one is a Moli&egrave;re connoisseur or not, Moli&egrave;re on a Bicycle is definitely very nice entertainment for lovers of French arthouse comedies. More, however, also not. Because ultimately, the script still lacks some bite and the staging lacks charm. Since the film practically burdens itself to be compared to the comedic talent of Moli&egrave;res, it would have needed a little more clever script to be able to live up to it. The basic idea, from lead actor Fabrice Luchini and Philippe Le Guay, is really quite amusing and the staging is filled with little successful moments. But in the end it just lacks the last spark to the really big ignition. If you don't need that and if you are just looking for nice entertainment with a literary reference, you can confidently get on your bike with Moli&egrave;re. Worth seeing!

Cinema trailer for the movie "Molière on a bicycle (Frankreich 2012)"
Loading the player ...