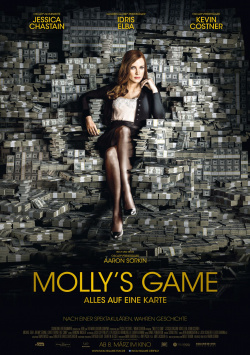 Molly`s Game - All in One Card

She was the great skiing hope of the USA, until an accident abruptly destroyed her dream of the Olympics. From then on, Molly Bloom (Jessica Chastain) had to earn her keep in other ways. Through a temporary job she gets into the underground poker scene in Hollywood. Here, the richest and most powerful men in town play for staggering amounts of money. Molly quickly learns that she could manage to get a big piece of this pie within the framework of applicable law. But unfortunately, the FBI doesn't quite see it that way, which is why Molly has to stand trial after a brief run of good luck. Her cards do not look good - only with the lawyer Charlie Jaffey (Idris Elba) she still has a wild card in hand, which could turn the tide for her at the last moment.

Aaron Sorkin, who has already won an Oscar, several Golden Globes and numerous Emmy Awards for his screenplays, delivers a compelling directorial debut with Molly`s Game - All in One Card. The true story of Molly Bloom is told, especially at the beginning, with the same pace and cleverness that made Sorkin`s work for series like The West Wing or The Newsroom so special. With his TV scripts in particular, quick dialogue made up the pace, with characters usually delivering it in rapid strides through the scenery (the White House, a TV studio, or a newsroom) - a trademark that Sorkin himself wonderfully took aim at in a guest appearance on the comedy series 30 Rock.

In Molly`s Game, the pacing comes primarily from quick cuts, accompanied by a wonderful voice over commentary from Molly, who guides the viewer through her story with much cynicism and irony. The fact that Sorkin has kept his distinctive narrative style in principle, but has varied it considerably, can be described as the very great strength of this film, along with the great acting of Jessica Chastain and Idris Elba. Molly's off-screen narrative voice is also very helpful when it comes to the poker sequences, as it makes crucial elements of the game comprehensible even for laymen.

Although there is really only talking and poker being played here, Molly`s Game is exciting, involving and really extremely entertaining for long stretches. Only towards the end you notice a little that Sorkin is not yet quite as adept as a director as he is as a screenwriter. In the last act, for the first time, there are some minor lengths, which isn't a big deal after about two very fast-paced hours. Even if a few cuts here and there would have done the film good, in the end a very positive overall impression remains. If you liked movies like The Big Short, you shouldn't miss Molly's Game: intelligent Hollywood cinema with great actors and great dialogues. For this there is clearly one: Absolutely worth seeing!