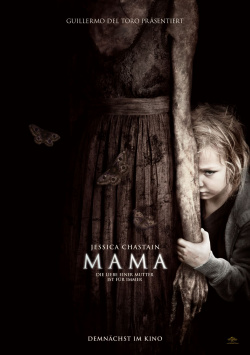 Ever since Jeffrey (Nikolaj Coster-Waldau) murdered his business partners and wife and kidnapped his children, the man has disappeared without a trace. That was in 2008, and five years later, Jeffrey's twin brother Lucas (also Nikolaj Coster-Waldau) has not given up hope that his two nieces are still alive. Sure enough, Victoria (Megan Charpentier) and Lilly (Isabelle N&eacute;lisse) are found one day in an abandoned cabin in the woods. The two girls are completely feral and barely act human. After intensive therapy brings them back to life, Lucas and his friend Annabel (Jessica Chastain) decide to take the girls in. While Lucas is thrilled to be able to be something of a father to his nieces, and Victoria in particular seems to be acting more and more normal, Annabel doesn't trust the peace. She hears strange noises and observes odd behavior in Lilly. But even when a terrible accident occurs, the young woman has no idea what horrors the girls have brought into the house.

Mama is based on a short film by Andres Muschietti from 2008 that was only 3 minutes long, but those three minutes were enough to catch the attention of Guillermo Del Toro (Pan`s Labyrinth, Hellboy), who quickly latched onto the idea of a feature film version. And so, with Del Toro`s celebrity endorsement, Muschietti was given the opportunity to make not only his feature film debut with Mama, but his Hollywood debut at the same time. The result is an atmospheric horror thriller that gives you blissful goosebumps, especially in the first half, with an eerie underlying atmosphere, expertly applied shock effects, and great sound design.

With Muschietti still focusing on more classic creepy effects like shadows and eerie noises here, the somewhat strange story works really well in the beginning. The engaging camerawork of Mexican Antonio Riestra and the atmospheric soundtrack by Fernando Vel&aacute;zquez (The Orphanage) underscore the restrained but, precisely because of that, effective horror, which is almost entirely bloodless. The good child actors and Jessica Chastain (Zero Dark Thirty), whose gritty look suits her surprisingly well, ensure that the film is also convincing in terms of acting, which is truly not a matter of course for this genre.

It would be so nice if it could be said of Mama that the film works until the end. Unfortunately, that's not the case. Because from the moment the viewer gets their first glimpse of the computer-animated Mama, the suspense curve drops precipitously. Unfortunately, despite many examples, it still doesn't seem to have gotten through to the makers of scary movies that CGI ghosts just aren't scary and in many cases even come across as downright ridiculous. And unfortunately, the caring horror nanny from the woods is no exception. While Mama thankfully doesn't come across as totally ridiculous, her all-too-obvious pixel appearance nevertheless almost destroys all of the tension that has been so carefully and effectively built up over the first 80 minutes.

With the right ending, this shortcoming might have been ironed out. But Muschietti completely misses that opportunity. Instead, he presents a gruesome cheesy finale that just comes across as unintentionally hilarious, especially with the last few seconds. It's clear that the director wanted to present a sad and very touching ending in a certain way. But unfortunately he didn't succeed at all. Too bad!

So Mama is unfortunately at the end not the film that the very good beginning promises. But if a few very effective moments of classic creepiness are enough for you and if you can overlook the unsuccessful last third because of the atmospheric mood, this dark form of motherly love can still be recommended to you. The bottom line is that it's still worth seeing, with some reservations!

Cinema trailer for the movie "Mama (Spanien/Kanada 2012)"
Loading the player ...