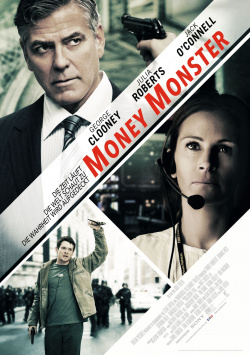 Lee Gates (George Clooney) is the host of the hit financial show MONEY MONSTER. Because he has a reputation for being a true financial genius, many viewers trust his investment tips. And it's not unusual for them to make big profits. But then a high-tech stock that Gates had touted as an absolutely safe investment tip mysteriously crashes, and investors lose millions. Among them is the simple worker Kyle (Jack O`Connell), who has lost all his savings due to the stock price drop. And he`s not about to take that lying down. During a live broadcast, he storms the MONEY MONSTER studio and takes Gates, his producer Patty Fenn (Julia Roberts) and the rest of the crew hostage. He wants answers to the questions no one in the media dares to ask. And if he doesn't get them, he's ready to blow himself, Gates and the others up. A desperate race for time and the truth begins - and it's all live on air.

With her latest directorial effort, Money Monster, Jodie Foster ventures into the difficult arena of the international financial market. Stock market transactions, financial crisis, computer algorithms developed for the financial market - these are not necessarily subjects that great cinema entertainment is made of. It is a challenge to explain very complex issues in a way that is understandable to lay people and to integrate them into a story that is both exciting and entertaining, but at the same time can stimulate the intellect. Foster has succeeded very well in doing just that with her film. George Clooney's character serves to bring the audience closer to the complicated issues in an easily understandable way, which he manages to do very well with a lot of wit and some bite. And whenever he does threaten to drift too much into incomprehensible technical jargon, there's the simple man off the street who points a gun at him and forces him to explain to the hell of him how it could happen that a supposedly so safe stock could fall so low.

What is revealed in the process may be fictional - but that doesn't make it unrealistic by any means. There are many aspects of the story that reflect everyday life in the financial markets very well, which really only evokes one thing in the viewer: Anger! But Foster is also able to counteract this skillfully with some well-placed tricks. Because even though Money Monster is first and foremost a thriller, there are also many humorous elements, such as the war of words between Gates and Patty or a literally running gag about one of the show's producers. This lightens up the upsetting subject matter a bit, which in turn leads to the fact that the entertainment value of the film goes up significantly.

Even though the story and its course is rather conventional and predictable at its core, Foster still manages to counteract the audience's expectations very well a few times and thus then still provides a few surprises. Due to the decision to tell the story in real time, the story's tempo is also very captivating, so that minor flaws hardly matter. And so the movie offers really good entertainment with an almost perfect ending. Because after the big showdown there is a moment that perfectly sums up the film's media and social criticism in a few seconds with extremely biting cynicism and thus actually sets the ideal ending. Unfortunately, there is an unnecessary epilogue slapped onto this moment, which is not only very predictable, but also distractingly cheesy, and which unfortunately diminishes the effect of the previous scene significantly. While this may prevent Money Monster from bidding farewell to its viewers in the best possible way. But even this weak scene can't prevent the film from being a first-class financial thriller with great actors and an excellent production. Therefore applies: absolutely worth seeing!