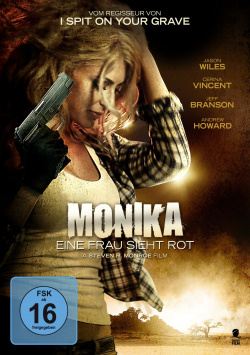 Content: The unsuccessful actor Reagan (Jason Wiles) has always had visions and premonitions that cannot really be explained. Mostly he ignores them. But when his buddy Double (C. Thomas Howell) sends him a photo from Las Vegas of a woman he has recently met in his dreams, he decides to travel to Las Vegas. In fact, he quickly meets this mysterious dream woman Monika (Cerina Vincent). Between the two the sparks spray and already after few hours they land together in the bed. When Reagan visits his friend Double after a night full of passion, his girlfriend Andrea (Elisa Donovan) tells him the unbelievable: allegedly Monika was brutally murdered last night. But he was with her the whole time, wasn't he? At first, he believes in a bad joke. But soon a cruel truth reveals itself to him, which leads him to the dealer Terry Jo (Jeff Branson) and his brutal boss Eli (Andrew Howard), with whom Monika apparently still has a score to settle...

"Monika - Eine Frau sieht rot" starts with an exciting premise, which Steven R. Monroe, director of the remake of "I spit on your grave", also very engaging. With a very artificial, but also extremely atmospheric colouring, he builds up a mysterious story, which he spices up with rather untypical pictures of Las Vegas and a hot and humid sex scene. The fact that the actors try hard, but act a bit wooden, also doesn't matter much. Jason Wiles, known from the TV series "Third Watch", tries very convincingly to get the best out of the script and Cerina Vincent ("Cabin Fever") also tries hard to bring more than just her curves into the right light.

Leider the script gets lost in much too long dialogue scenes, which often just seem like bulky filling material. Here, the viewer gets the feeling that "Monika - Eine Frau sieht rot" would have made a great short film, but doesn't contain enough material for a 90-minute feature film. Thus, neither the well done visual realization, nor the not quite logical, yet quite surprising ending can prevent the tension curve from gradually dropping off after the very well done first third.

However, even though Monroe leaves a lot of potential unused and the B-movie character of the movie becomes more and more obvious in view of the rather lengthy scenes, "Monika - Eine Frau sieht rot" isn't a bad movie at the bottom line. It's not a very good mystery thriller either, but it's a solid one, with more excitement to offer than many other home cinema premieres. Those who don't expect profound dialogues, highest acting art or complete logic could be entertained very well. And in this case a satisfied one also applies: Worth seeing!

Picture + Sound: With the picture of the DVD the strongly distorted coloration is particularly noticeable. The scenes in Vegas are dominated by green and brown tones, giving the action a very special, somewhat unreal atmosphere. The image sharpness is on a generally good level, only in a few darker moments a slight image drizzle can be spotted. The sound is available in the German version as Dolby Digital 5.1 Mix as well as in a DTS mix. The latter is somewhat more powerful than the DD 5.1 track, which is also good, but the action is mainly in the front area. Only from time to time do sound effects such as shots provide clear movement in the surround range. Good!

Extras: As a bonus there is only the trailer and further program tips of the provider to see.

Fazit: "Monika - Eine Frau sieht rot" is a thriller that strives for originality and doesn't just want to offer its viewers something special in dramatic terms. This leads to some really well done moments, which make the movie worth seeing, despite the rather wooden play of the actors. Nevertheless, it becomes more and more clear towards the end that some good ideas are not enough to compensate for the complete lack of logic. Nevertheless: if you like a good revenge thriller and accept a certain B-Movie character for it, you can risk a look here