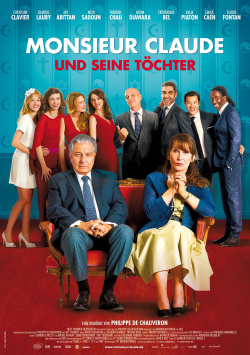 Monsieur Claude and his Daughters

Monsieur Claude (Christian Clavier) and his wife Marie Verneuil (Chantal Lauby) are the proud parents of four beautiful daughters. The couple not only love their children, but also family traditions. Therefore, they are less than pleased when their first three daughters choose husbands who are so unlike their traditional beliefs: S&eacute;gol&egrave;ne (Emilie Caen) marries the Chinese Chao (Fr&eacute;d&eacute;ric Chau), Isabelle (Fr&eacute;d&eacute;rique Bel) the Muslim Rachid (Medi Sadoun), and Odile (Julia Piaton) finally the Jew David (Ary Abittan). Every family reunion becomes a multicultural stress test for the parents and every conversation an emotional minefield. All hope now rests on little daughter Laure (Elodie Fontan). When she announces that she wants to marry a French Catholic, all is well again for Claude and Marie - until they come face to face with their son-in-law-to-be, the black Charles (Noom Diawara). Now disaster seems perfect. But when Charles' family arrives from Africa for the wedding, and his father Andr&eacute; (Pascal Nzonzi) reveals similar reservations about this mixed marriage, the chaos really begins.

Comedies about multicultural society are booming at the moment. But the French hit Monsieur Claude and his daughters clearly stands out from the crowd. Because here it's not just two different cultures and religions that collide, but five. And of course this gives the script by director Philippe de Chauveron and his co-writer Guy Laurent the opportunity to play with clichés and stereotypes to the full. Here really everyone has prejudices against the others, which is why it comes not only between Monsieur Claude and his daughters, but also between the sons-in-law among themselves again and again to amusing friction.

It is very good that the film is not positioned as other multicultural comedies rather one-sided and calls for that you only have to open up to other cultures to really understand them. Rather, de Chauveron also tries to show how difficult it can be when you have to realize that your own, very important traditions are disappearing more and more as a result and at some point are only rudimentary at best. With a mixture of subversive humor and unrestrained slapstick, the film actually manages not only to romanticize the mixing of different cultures, but also to take the concerns of more traditionally minded people seriously and to portray Monsieur Claude not only as an obdurate bourgeois or closet racist.

Another plus point of the film is its humor, which does not shy away from delivering side-swipes beyond political correctness. And also here really everyone gets his fat. In an extremely funny way the film shows that there are prejudices in almost everyone's mind, even in those who are convinced that they are only victims of everyday racism. Now this may all sound like heavy fare. But the opposite is true. Monsieur Claude and His Daughters is a very light comedy and one of the most enjoyable feel-good French films since Pretty Best Friends. Philippe de Chauveron has done a very good job of telling a very multi-faceted message in a humorous way and without raising a moral finger. It's charming, a little wicked, and above all, incredibly funny.

Sure, Monsieur Claude and His Daughters isn't necessarily upscale arthouse fare for refined minds, but primarily a light summer comedy that isn't above some minor silliness. Of course, the conflicts here resolve a bit too easily and the walls in the heads are torn down too quickly. But that's exactly what makes this movie so feel-good. So if you like French comedies in general and just want to have a good laugh, this likeable movie can be recommended to you. Absolutely worth seeing

Cinema trailer for the movie "Monsieur Claude and his Daughters (Frankreich 2014)"
Loading the player ...