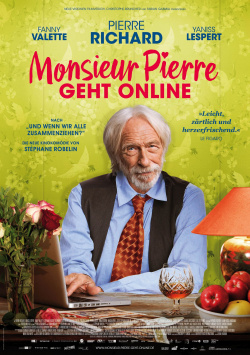 Widower Pierre (Pierre Richard) is a curmudgeon of the worst kind. He rarely leaves his apartment and hates any form of change. To break him out of his sullen lethargy, his daughter Sylvie (St&eacute;phane Bissot) asks Alex (Yaniss Lespert), her daughter's friend, to introduce the old man to the infinite reaches of the Internet. Reluctantly, the unsuccessful and penniless writer agrees, on the condition that Pierre does not find out that Alex is the boyfriend of his beloved granddaughter. And so, with the help of his young teacher, the pensioner dives into the online world, which is completely foreign to him. When he stumbles across a dating portal, he literally blossoms. Here he meets the young Flora (Fanny Valette), with whom he exchanges passionate messages. When Flora wants to get to know the unknown romantic, Pierre makes Alex an immoral offer: he wants to pay him to pretend to be the author of the mails and meet Flora. What consequences this will have, he does not suspect.

After And If We All Move In Together, director St&eacute;phane Robelin has once again enlisted the wonderful Pierre Richard for his latest comedy Monsieur Pierre Goes Online. The film is reminiscent of an internet version of Cyrano de Bergerac in places and has some genuinely funny moments to offer. Pierre's first steps on the World Wide Web, for example, are just as funny - thanks in part to Pierre Richard's acting - as his attempts to eavesdrop on Alex's date with Flora. There are always moments to smile at and some that really make the audience laugh heartily. Richard and his younger co-star Yaniss Lespert harmonize perfectly together, which also makes for some very amusing moments.

Unfortunately, the whole thing kind of runs out of steam in the home stretch. It sets up a very big conflict that fizzles out into nothingness almost as it passes by. Moreover, in this very quickly handled finale, the gags also become increasingly flat, which unfortunately also has a bit of a negative effect on the overall impression. After the many really nice moments, especially Flora's behavior at the end isn't really comprehensible. Robelin could have definitely used a little more pacing in other aspects of the story, all the more time to resolve the carefully built conflict in a more believable way.

Besides that, Monsieur Pierre Goes Online is a genuinely charming and cute film that makes for enjoyable and extremely entertaining cinema with its wonderful lead actor and some very funny ideas. If you like light French comedy fare, you'll love Monsieur Pierre and His Amorous Adventures on the Internet. Worth seeing