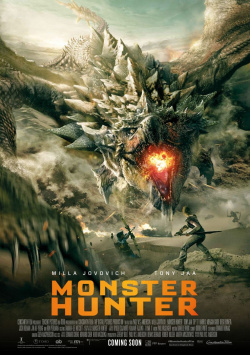 While searching for some lost soldiers, Captain Artemis (Milla Jovovich) and her unit (T.I. Harris, Meagan Good, Diego Boneta) are caught in a mysterious sandstorm that transports them directly to another world. Here, their deadly foes are not enemy combatants, but giant monsters. On the run from the creatures, Artemis meets the warrior Hunter (Tony Jaa), who seems to always be one step ahead of the monsters with very special abilities. But then they are confronted with a deadly danger that seems impossible to overcome even with Hunter's help...

After "Resident Evil", "Monster Hunter" is the next video game adaptation from Paul W.S. Anderson, with his wife Milla Jovovich taking the lead role. Since the release of the first game from the forge of renowned Japanese video game developer CAPCOM debuted in 2004, the series has built a huge fan base. THE fans include Anderson, who presented initial ideas for a film adaptation to CAPCOM executives back in 2009. Based on the game "Monster Hunter: Home", he was finally able to make his vision a reality in South Africa and Namibia in 2018.

How well the realization succeeded, I can not judge, because I do not know the games. I therefore rate the film only on its entertainment and show values. The latter are really high in some scenes. Many fights against the monsters are well done and parts of the world in which the monsters are, look really good. It's just a shame that these aspects worth seeing are embedded in an extremely thin story that suffers from extremely flat dialogue and one-dimensional characters. Anderson unfortunately doesn't succeed at all in dramaturgically building an exciting world that grabs the audience and also binds them emotionally to the characters.

But you don't care about them at all. Anyone who can name the main characters - while the credits are still rolling - is really good. I didn't manage to do that. "Monster Hunter"is a pure effects spectacle and as such the film is decent, but unfortunately nothing more. Anyone who needs more than just fodder for the eyes will be bitterly disappointed here. Therefore, if you just want to see some monster action, this is the movie for you. For all others, however, there is unfortunately only a "bedingt sehenswert"!