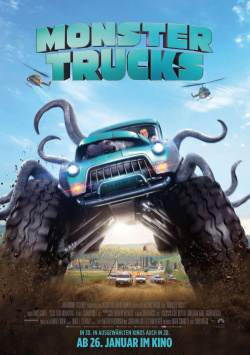 Tripp (Lucas Till) is sick of small town life. His mother (Amy Ryan) makes just enough as a cop to keep her afloat, his father has long since skipped out, and he has no real friends at his school. So he spends every free minute tinkering with his truck, which he plans to use to leave the Gegens as soon as possible after graduation. But then something unbelievable happens: during oil drilling by an unscrupulous industrialist (Rob Lowe), living creatures are flushed to the surface in a water reservoir deep underground. Two of them are captured, the third creature manages to escape to the junkyard where Tripp is wrenching on his truck. After the initial scare, the lovable monster Creech and the boy become friends, and when it hides from its pursuers under Tripp's truck, the latter experiences an unexpected tune-up - the start of a fast-paced adventure.

With Monster Trucks, Ice Age creator Chris Wedge delivers his first live-action film. Unfortunately, he didn't really do well with this debut. It seems like Wedge was trying to direct a family adventure in the spirit of 80s classics like E.T.. He's visibly concerned with imbuing the very friendship between Tripp and his lovable monster buddy with the kind of charm that once made fantasy adventures so watchable and timelessly beautiful for young viewers. But that just doesn't want to work here. The story is unfortunately absolute rubbish and bristles with logic holes and clichés.

The effects are quite nice to look at and Tripp's tentacle friend Creech is also quite cute. But that's where it stops. The characters all remain colorless and never manage to make you really care about them as a viewer. Also the friendship between the young truck fan and Creech is too loveless to really touch you. This is where Wedge can learn a lot from colleagues like Steven Spielberg. Without an emotional connection to the characters, all that remains is a completely silly action spectacle that not only makes little sense, but is even less fun.

That's because Wedge is too uptight in trying to deliver really great popcorn cinema here. But for that he simply lacks the right ingredients. A few nice effects and target-group-oriented action interludes are just not enough to be able to convince all along the line. The fact that the film flopped at the US box office is hopefully a lesson to the studio bosses: a film needs not only a big budget (in this case, it is said to have been up to 125 million dollars), but also a script that is even remotely sensible. No one seems to have read that in the case of Monster Trucks before this mess was greenlit. Too bad for all the talent in front of and behind the camera, who all - like the audience - deserved a better movie. Therefore also: Only conditionally worth seeing!