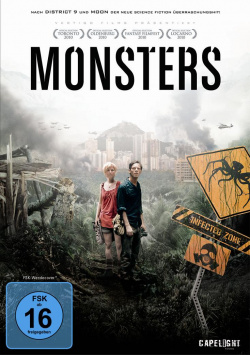 Movie: With his feature debut Monsters, Brit Gareth Edwards has achieved a real feat: with a low budget and almost entirely improvised dialogue, he has created an intriguing mix of alien invasion thriller, romance film and road movie that thrills with engaging imagery and a gripping story.

A few years ago, an alien life form came to Earth on a NASA probe. The part of Mexico where the creatures have spread has been unceremoniously declared an infected zone, with a large wall separating it from the rest of the country and, of course, the United States. Inside the infected zone, the military keeps fighting the alien monsters to prevent them from spreading outside the area. Photojournalist Andrew Kaulder (Scoot McNairy), who's headed to Mexico in pursuit of the perfect picture of the monsters, is given the task by his boss of bringing his young daughter Samantha (Whitney Able) back to the U.S., as the borders are set to close for good in the next three days. But the only way that remains for the two leads through the middle of the infected zone...

Who expects an effects spectacle a la Independence Day, will be disappointed by Monsters guaranteed. For there is hardly anything to see of the giant aliens. Only from a distance the creatures are to be seen now and then dimly and only at the end they appear briefly in full size. Instead, the action is driven by the relationship between Andrew and Samantha and the humans they encounter on their perilous journey. While there are some genuine moments of suspense that can even be called action in some respects, overall the real tension comes from the ominous atmosphere that Edwards establishes at the beginning of his film and manages to maintain until the end.

Monsters is more of a quiet, dialogue-heavy film that is aimed more at an arthouse audience than sci-fi and horror fans. And this is where the film's strength and weakness lie in equal measure. The great strength is that Gareth Edwards has simply directed something new, something different, that completely defies audience expectation. The great weakness is that this will make it difficult for this inherently great film to find its audience. For while arthouse audiences will likely be less likely to go to an alien film titled Monsters, effects-starved fantasy fans hoping for the titular monsters will be so disappointed that they are unlikely to recommend the film to others. Whether the small cut that will realize how good Monsters actually is will be enough to give the film the success it deserves seems rather doubtful, especially since smaller films like this are rarely given the opportunity to slowly but surely build an audience these days.

Picture + Sound: Even if here has been worked with a low budget, so the film can also be seen technically. The image sharpness is also high level, soiling or interference are not discernible. The sound pleases with its well-mixed surround effects and even if the tonal action remains rather discreet and unspectacular over long stretches, the purposefully used ambient sounds provide an engaging atmosphere.

Extras: Only the single disc was available for the test, which contains only an interesting audio commentary by the director. The purchase version has far more extras on a second disc, including a nearly hour-long making of, two featurettes on the editing and visual effects, and a short film by director Gareth Edwards.

Those wanting even more extras will have to reach for the Blu-ray, which also has two in-depth interviews (totaling over 70 minutes) and a short featurette from New York Comic Con to offer.

Conclusion: Monsters is intelligent, quiet arthouse science fiction that is a real addition to the genre. The home cinema version can fully convince both technically and in terms of bonus material. Absolutely recommendable