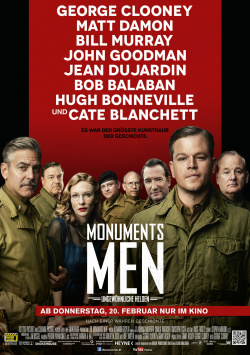 There are countless books and films about the Second World War, about the individual battles, about the cruel crimes of the Nazis and about very personal fates. And yet there are always stories that have not yet been told in this way. Robert M. Edsel and Bret Witter have written down one of these stories in their book Monuments Men: The Hunt for Hitler's Looted Art. It is the True Story of an unusual Allied Special Forces unit whose mission was to save humanity's cultural legacy from destruction in the final stages of the war. It's a thrilling, incredible and interesting story that George Clooney used as the basis for his latest directorial effort.

Monuments Men is based on true events, yet Clooney and his screenwriting partner Grant Heslov took some dramaturgical liberties, due to which they also didn't give the men of this special unit their real names. Clooney himself plays art historian Frank Stokes, who, with the support of President Roosevelt and General Eisenhower, assembles a team of museum directors, architects, artists and art historians to prevent the destruction of valuable cultural assets throughout Europe. Together with James Granger (Matt Damon), Richard Campbell (Bill Murray), Walter Garfield (John Goodman), Jean Claude Clermont (Jean Dujardin), Donald Jeffries (Hugh Bonneville) and Preston Savitz (Bob Balaban), Stokes embarks on the difficult mission, which already threatens to fail due to the men's age and lack of experience in wartime operations. But then, with the help of Frenchwoman Claire Simone (Cate Blanchett), they get on the trail of the secret storage sites of art treasures stolen by the Nazis and must venture behind enemy lines to save them from complete destruction.

The trailer for Monuments Men somewhat suggests that the film is some sort of World War II variant of Oceans Eleven. Therefore, if you're expecting some sort of fast-paced rogue comedy, you'll almost certainly be disappointed. That's because Monuments Men is a very quiet, rather unspectacular film, with long dialogue scenes clearly dominating over amusing or even action-packed moments. Clooney has directed a rather stale heist movie that in many ways defies not only audience expectation, but also mainstream viewing habits. And this could be the reason why the reviews of Monuments Men are rather restrained on the whole.

Whoever gets involved with the rather restrained production will not find it boring, but will definitely recognize the entertainment value that lies dormant in it. Because even if some scenes are a bit long winded and the film as a whole falls short of its possibilities, the story and the great ensemble of actors have enough traction to carry the action even over its somewhat tough and less successful moments. The actors have perfect chemistry and especially Bill Murray and Bob Balaban have some excellent scenes. Judging by the cast, Monuments Men is undoubtedly a hit - and perhaps that's exactly why it becomes so abundantly clear in places that the overall quality of the film doesn't really match that of the material and cast.

Clooney and Heslov set out to create a film in the tradition of Broken Chains or The Dirty Dozen, where the audience falls in love with the characters as much as the story. But even though the potential is there, the script is just too unspectacular to pull it off over the entire runtime. Monuments Men is a good movie, entertaining in places and wonderfully acted. Still, you're left with a bit of disappointment in the end and the realization that a good ensemble doesn't make a masterpiece. Therefore, for all viewers who appreciate rather dignified entertainment and neither expect much action, nor real suspense, Clooney's latest directorial effort is absolutely worth seeing, despite some lengths!