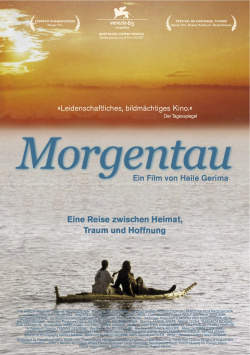 After studying medicine in Germany for several years, Anberber (Aaron Arefe) returns to his Ethiopian homeland. He arrives with high ambitions, but these are quickly crushed when Anberber realizes that the idyll of his childhood has given way to fear and violence. In the midst of his overwhelming hopelessness, Anberber repeatedly flees into memories of his childhood, of his youth, of his studies, and before his eyes unfolds the story of a country that is deeply hit on the ground but for which there seems to be hope...

With "Morgentau" director Haile Gerima has staged an engaging journey through more than two decades of Ethiopian history. With his first feature film in eleven years, Gerima stages a highly ambitious work that challenges its viewers in many ways. Not only does the use of different time levels and a constant jumping back and forth between these individual levels make a relaxed leaning back or pure enjoyment of the strong visual language of the film almost impossible. Since there is often only little spoken and much only hinted at, a certain political and historical background knowledge is also advantageous in order to really understand the events presented in the original with German subtitles.

However, even if this is enormously exhausting at a running time of 140 minutes, the viewer is rewarded for it. Despite some lengths and weaknesses, "Morgentau" is an engaging drama, whose numerous strong moments dominate over the lengths and somewhat more bulky aspects of the production. What's striking is that the scenes set in Germany are among the film's greatest weaknesses. While the moments in Anberbers homeland are able to convince despite numerous very obvious lay actors, Anberbers memories of Germany seem somewhat stilted and strenuously instructive.

Who is interested in African cinema and the history of Ethiopia and is willing to invest a lot of attention and sitting flesh, will experience "Morgentau" despite its weaknesses as a real arthouse pearl. But those who find it difficult to make beautifully photographed but somewhat bulky arthouse films anyway will be put to a damn hard test here. Worth seeing