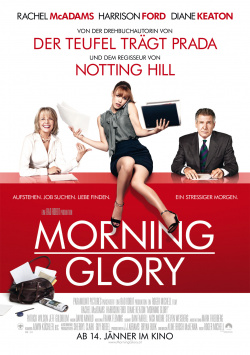 As "Indiana Jones" he's put the bad guys to flight with his whip, as Han Solo he's raced through space, and in "Blade Runner" he's hunted down replicants. But even in a pinstriped suit behind a news desk, Harrison Ford can strike fear into his peers, as "Morning Glory" proves in a most amusing way.

Actually, Becky Fuller (Rachel McAdams) was hoping for an endorsement. But instead, the dedicated television producer unceremoniously lands on the street and has to look for a new job. The breakfast show "Daybreak" offers Becky the perfect opportunity to prove her skills and get back on her feet. That's because the show desperately needs to get out of a deadly ratings slump to avoid being cancelled. With the hiring of legendary TV anchorman Mike Pomeroy (Harrison Ford), that goal is to be achieved. Too bad Pomeroy hates any kind of light entertainment and shows this all too clearly to his co-host Colleen Peck (Diane Keaton) as well as to the viewers. But Becky doesn't admit defeat that easily; after all, it's not just the future of the show that's at stake here...

"Notting Hill" director Roger Mitchell has created a top-notch media comedy with "Morning Glory". He is helped not only by the amusing script, penned by Aline Brosh McKenna ("The Devil Wears Prada", "27 Dresses"). The great cast also plays a significant part in making "Morning Glory" so worth watching, despite quite a few clichés and some rather flat gags. At the same time, Mitchell has managed to cast not only the leads aptly. Even minor supporting characters can entertain thanks to the good performances of Jeff Goldblum, John Pankow (known from the sitcom "Crazy for Dir") or Patrick Wilson.

But the factor that makes this film so worth seeing is Harrison Ford. As former TV legend Mike Pomeroy, still mourning his former glory and expressing it with a permanently bad temper, Ford is once again at his best. Especially the quarrels between him and the dedicated Becky, who doesn't take Mike seriously because of her youthful age, but also the exchange of blows with the former beauty queen Colleen provide good laughs again and again. It is also nice that Diane Keaton after some embarrassing slips ("From woman to woman", "Mama`s Boy") finally gets to show her full comedic talent again.

As some very amusing dialogue has been put into the mouths of the actors and Mitchell`s production also comes up with some very pretty gags, "Morning Glory", despite lacking originality and a few minor hangs, has become a real hit that can be warmly recommended to any lover of entertaining old-school US comedy fare. Absolutely recommended!