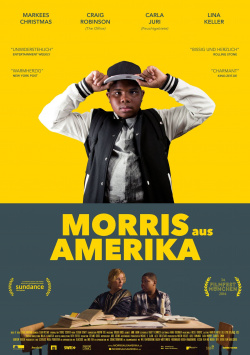 13-year-old Morris (Markees Christmas) has a tough time as a chubby black boy anyway. But the fact that he has to move with his father Curtis (Craig Robinson) from New York to Heidelberg doesn't make his life any easier. In spite of tutoring in German, the foreign language is still a problem for him and he simply doesn't want to succeed in finding new friends. Curtis tries his best to help the boy find his place in this strange world. But although the two have a very close relationship, he does not really want to succeed. Only when Morris meets the somewhat older Katrin (Lina Keller) does the tide seem to turn…

"Morris from America" is a very charming story about how an outsider tries to find his place in a strange place. It is a humorous, but also emotional father-son story that moves far away from the usual clichés and strives for realism without losing sight of a certain entertainment value. Director Chad Hartigan has especially implemented the moments in which it's all about being in love for the first time very well observed. Skilfully he avoids the usual teen movie clichés and gives the story a credibility that many other works in which teenagers are the focus of attention lack. Newcomer Markees Christmas plays  with a refreshing naturalness that also has a positive effect on the more tenacious moments of the movie.

But the chemistry between the young actor and his older co-star Craig Robinson ("This is the end", "The Office") works especially well. There are some moments between Morris and Curtis that work so well because of the unagitatedly believable play of the two that you completely forget that they are just actors and not really father and son. And it's exactly those moments - which are sometimes humorous, sometimes very serious - that comfort you about most of the weaknesses of the script. Because that has a few pitfalls and sometimes doesn't seem like a harmonious whole. This eventually leads to the story being charming, but lacking the finishing touches to be something really special.

So "Morris from America" offers nice entertainment with a lot of heart, a look at typical German quirks from the point of view of a young American as well as a really cute story about the first big love. These are many good reasons why this somewhat different youth film deserves a very clear "worth seeing" despite some small weaknesses and lengths.

Cinema trailer for the movie "Morris from America (Deutschland/USA 2016)"
Loading the player ...