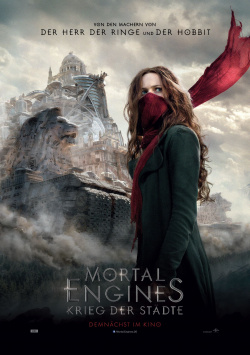 Mortal Engines: War of the Cities

In the future, Earth's resources are nearly depleted. After a devastating war that lasted only a few hours, the planet has been rendered nearly uninhabitable. The few surviving humans have banded together in motorized cities that can hunt down and destroy other cities to take their valuable resources. One of the most powerful cities is London, which is to be led into a new age by Thaddeus Valentine (Hugo Weaving). His hunger for power is opposed only by the young fighter Hester Shaw (Hera Hilmer), who has a personal score to settle with Valentine. Together with museum employee Tom (Robert Sheenan), who is initially involuntarily involved in the fight, and the rebel group around Anna Fang (Jihae), Hester wants to stop the destructive London and destroy Valentine - but he has been working in secret on a weapon against which even the most militant resistance seems powerless.

The production and screenplay of Mortal Engines: War of the Cities were written by none other than Peter Jackson and his Lord of the Rings co-stars Fran Walsh and Philippa Boyens. A longtime Jackson companion also took a seat in the director's chair: Christian Rivers was responsible for the visual effects on The Lord of the Rings and King Kong, even winning an Oscar for the latter. And on Parts 2 and 3 of The Hobbit, he even rose to assistant director. For the film adaptation of Philip Reeve's dystopian novel, which was followed by three more installments, Rivers got to sit in the coveted director's chair for the first time.

The strength of his feature debut is clearly what won Rivers an Oscar. The visual effects are really great at times. The steampunk version of London is a feast for the eyes, and the detailed sets further support that impression. It's a great spectacle to watch the film. But: As much as the eyes are delighted, the intellect is not. It's not exactly stimulated by the somewhat sparse story. The problem is that the film gets too lost in its visual gadgets and in the process fails to flesh out the story and its characters in a believable way.

This starts with very basic things. For example, it's never really explained why travelling cities were built. The explanation that this was a way to hunt for important resources is a bit poor, especially when you consider the energy needed to move such a city. The biggest flaw, however, is that the characters remain completely one-dimensional. It's hard to develop any real interest in the characters, which means the emotional moments can never even begin to work. And in the case of the robot-like hunter Shrike, his big showdown feels almost unintentionally comical.

Here, it would have made perfect sense not to rehash the entire world and the conflicts of the main characters in a short intro and fragmented flashbacks. Where Jackson dragged the story out too much in The Hobbit, his script here simply rushes through the action too quickly. Sure, Mortal Engines: War of the Cities is thoroughly entertaining due to the high show values. But the really big wow-effect, which could have been achieved here, is unfortunately missing. Positively must be noted, however, that the story was told without a big cliffhanger round to the end - of course, with a back door for a possible sequel.

So if you're just looking for fodder for the eyes, you'll be really well served here. But if you dare to expect a good story and interesting characters in the cinema as well, you will be rather disappointed by the drawing board story. All in all a solid: Worth seeing!

Cinema trailer for the movie "Mortal Engines: War of the Cities (Neuseeland / USA 2018)"
Loading the player ...