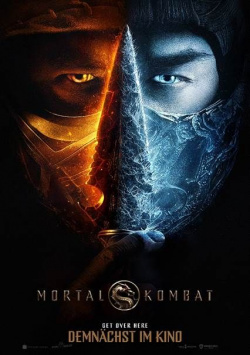 There is a fierce battle between Earth (Earthrealm) and Outworld. If Shang Tsung, the ruler of Outworld, and his fighters succeed just once more in winning a Mortal Kombat tournament against the fighters of Earthrealm, Earth's days are numbered. Now, Earth's greatest champions are to be trained to fight this final battle. But why young MMA fighter Cole Young, of all people, is one of those chosen, no one can say - least of all him. True, he was born with the mysterious dragon mark that makes him a champion. But he lacks strength, technique, and most importantly, his arcana - the immense power inherent in the soul of every champion. After he, along with Sonya Blade and the mercenary Kano, fail in training to fight Shang Tsung's champions at the temple of Lord Raiden, an Elder God and protector of Earthrealm, Cole already wants to give up. But that would mean the battle would be lost before the final tournament even begins...

Before I begin my actual review of the latest "Mortal Kombat" adaptation, I must first out myself as a non-gamer. I never got around to playing more than Pac-Man or Super Mario. Nevertheless, I am of course familiar with "Mortal Kombat". I've also seen the 1995 film adaptation, which is why I've been able to get at least a little taste of the very expansive world of the popular videogame series. Still, I would never presume to call myself a fan or a connoisseur. And so it doesn't bother me that the movie doesn't offer a 100% accurate "Mortal Kombat" lore, that a new character was invented as the main character instead of using the inexhaustible pool of characters known from the games or that Liu Kang and Kung Lao, the great heroes of the games, are rather relegated to supporting characters here. I can very well understand that fans might be offended by that. For me, on the other hand, it doesn't matter much.

I had a pleasantly good time with the movie. The fights are super choreographed and according to the spirit of the games also extremely bloody and brutal. The FSK 18 release is quite justified. What I liked particularly well and has also consoled me over some of the weaknesses, is the fact that the film over long stretches not even trying to be more than a bloody trash pearl. Granted, the dialogue is arguably flat at times and character development is few and far between. This becomes apparent in the few quieter moments, where the film reveals its weak points very clearly.

However, whenever the entertainment factor is paramount, this "Mortal Kombat" version absolutely scores. While Kano provides some good laughs with his one-liners, Sub-Zero is a really good villain, who even comes across as really creepy in some scenes. Especially with him, the CGI effects can also convince all the way, while the four-armed Goro looks too much like a generic CGI character.

I'd also like to address one criticism from fans here at the end: it's a shame that there's no titular tournament in a new "Mortal Kombat" movie. That is only teased for the future, in hopes that there will be more parts. Especially with the ending, this movie feels too much like a (too) long intro for an even bigger epic, but not a standalone work. Especially when there shouldn't be a sequel, the story just feels unfinished, even if the entertainment and spectacle value is overall very high. For me, a successful "brain off, movie off"-fun, but at which the fan-minds will certainly divide. Worth seeing!