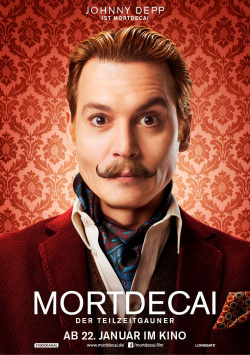 That Johnny Depp has a penchant for eccentric characters, we know not only since Pirates of the Caribbean. And so it's no real surprise that he also mimes a rather quirky contemporary in his latest film Mortdecai - The Part-Time Crook: Charlie Mortdecai, a flamboyant art dealer, bon vivant, occasional crook and, most recently, proud moustache-wearer. Mortdecai has only one problem - he is completely broke. In order to continue to offer himself and his wife Johanna (Gwyneth Paltrow) the luxurious life they are used to, money is urgently needed. Good thing he's supposed to help MI5 Inspector Alistair Martland (Ewan McGregor) recover a coveted Goya painting that recently disappeared under mysterious circumstances. Because with the reward, he could wipe out all his debts in one fell swoop. And so Mortdecai and his faithful servant Jock (Paul Bettany) set out on a hunt for the painting that takes him from London to Moscow to Los Angeles, wreaking havoc along the way. But his enemies should never underestimate him - because this part-time crook is a fistful.

Mortdecai - The Part-Time Crook is based on the novel Take That Thing Away! by Kyril Bonfigliolo. Director and screenwriter David Koepp has fabricated a colorful, turbulent crime comedy from the first part of the popular book trilogy, which has some really good gags to offer, but often unfortunately overshoots the mark completely and is then just flat and silly. The performance of Johnny Depp also leaves such an ambivalent impression. You can tell in every second that he had a lot of fun playing such an overdone character. Whenever Depp takes a more reserved and nuanced approach, his joy in acting is perfectly transferred to the audience. Especially in the interplay with the more serious Ewan McGregor, Depp is always on top form. But in other moments his acting seems too exaggerated and comes dangerously close to the border of embarrassment here and there.

Just in these moments his co-stars manage to steal the show without any problems. Paul Bettany, in particular, consistently outshines Johnny Depp as a beefy servant who has the female world at his feet. Here it becomes clear that a little less slapstick would have done Depp's performance good. Mortdecai could have been a cult figure in his own right because of his unshakeable love for his moustache, which is not necessarily understood by his fellow men. But the eccentric art dealer lacks as a counterbalance to the slightly exaggerated silliness that made other of Johnny Depp's characters like Captain Jack Sparrow so special.

Koepp's production is overall very light on its feet, but at the same time also seems a bit old-fashioned. One feels reminded here and there of the crook comedies of the 60s and 70s. Thus, especially for older viewers, the comparison with the comedic greats of this era is certainly forced and one begins to suspect what, for example, a Peter Sellers would have gotten out of this very rewarding role. No question, there are many scenes where Johnny Depp is really good and the production is extremely entertaining. But there are also quite a few moments in which it becomes clear that great acting and a penchant for old-school slapstick are not enough to make a comedy really funny.

So Mortdecai - The Part-Time Crook is, on balance, neither a firework of great gags and good laughs, nor a total failure with an unbearable foreign-shame factor. Rather, the whole thing is a nice, somewhat half-baked cinema fun, which is really fun in its best moments and in its weakest moments just offers irrelevant boredom. If you like old-fashioned rogue comedies with good-humored actors and some really good gags, and if you can put up with a few little hangs and a lack of subtlety in the acting and staging, this turbulent hunt for the long-lost Goya painting can be recommended to you. Worth seeing

Cinema trailer for the movie "Mortdecai - The Part-Time Crook (USA 2014)"
Loading the player ...