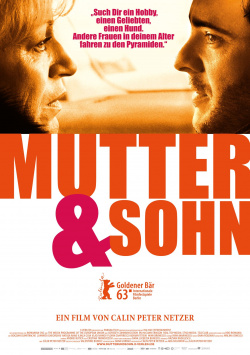 Wealthy Cornelia (Luminita Gheorghiu) is convinced that she knows best what is best for her adult son Barbu (Bogdan Dumitrache). She knows better than he does, and certainly better than his girlfriend Carmen (Ilinca Goia) does. And so it is natural for Cornelia to take the helm when Barbu is at fault for a fatal traffic accident. From now on, the successful architect has only one goal: to protect her son from the consequences and prevent him from going to prison. For the woman from the Romanian upper class it is a matter of course to buy everything and everyone. But is her motivation really just maternal care or rather ice-cold egoism?

With Mother & Son director Călin Peter Netzer won the Golden Bear at the Berlinale in 2013. Berlinale winners, with a few exceptions, are not necessarily known for appealing to a wide audience. Often, artistic merit far outweighs entertainment value, which is also minimized by a production that is unwieldy for most viewers. This doesn't automatically have to be a bad thing, as quality can't be measured by the number of viewers a film can inspire. On the other hand, winning a Golden Bear also doesn't necessarily mean that a film is excellent and it's just not understood by the general public.

Mother & Son falls somewhere in between. Netzer's film also makes it hard to get into the story with its very unwieldy narrative, especially at the beginning. This is further complicated by the fact that actually all the characters are unsympathetic. On the other hand, the story set in post-Ceausescu Romania, with its themes of class struggle, maternal care and corruption, has a very special appeal that makes the action exciting and engaging, despite its very worn beginning. This impression is especially supported by the convincing performance of Luminita Gheorghiu.

Every now and then Netzer sprinkles a subtle pinch of sarcasm into what is in itself a very dramatic story, which on the one hand lightens the tone of the film a bit, but also gives the whole thing more depth on a second level. It doesn't make Mother & Son any easier to watch, though. The award-winning drama is clearly not a film for a wider audience, but can only be recommended to viewers who are open to bulky art house fare from Eastern Europe. But then they get a very complex story, which is carried by a strong leading actress.