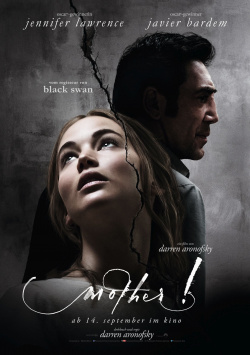 A young woman (Jennifer Lawrence) lives with her husband (Javier Bardem), a celebrated poet with writer's block, in a remote house that she has put a lot of effort and love into fixing up. She wants to create a little paradise here for herself and the love of her life. She doesn't like strangers in the house at all, especially not when they're as mysterious as the elderly man (Ed Harris) who shows up at her door one night claiming he thought her house was a motel. Poet gladly accepts the stranger and is honored that he turns out to be a big fan. He doesn't mind when the stranger's wife (Michelle Pfeiffer) suddenly shows up as well. The young woman, on the other hand, feels uncomfortable with the uninvited guests in the house, especially since the woman behaves very strangely towards her. When the couple's two sons arrive at the house and an argument between them escalates, the idyllic home turns into a nightmare for the young woman, which eventually takes on completely disturbing features.

Darren Aronofsky is a talented - some might even say gifted - filmmaker. There's no question about that. What he has created in terms of atmospheric visual worlds and how he uses the means of the medium of film to tell his sometimes very profound stories is often really quite great art. But already with his esoteric trip The Fountain and his Bible epic Noah, one had the feeling in places that Aronofsky's ambitions as an artist extremely disturbed the connection between director and audience. As a viewer, having to keep scratching your head in wonderment, wondering what the (admittedly fascinating) images are all about, does little for the entertainment value or a positive overall impression.

In such moments, saying that you shouldn't even understand what's being shown because Aronofsky is an artist with a very individual vision is just a cheap excuse. Art doesn't always have to serve up answers on a plate, but when all that's left are questions and confusion, it's just enormously frustrating. And that's the word that best describes Aronofsky's latest work, mother! The viewer is so inundated with meaning-laden symbolism in this mystery-psych-horror chamber game that at some point you give up trying to interpret it. Is the whole thing a parable of the refugee situation facing our society? Is it a creation story? Is it a movie about man destroying his paradise? Never mind. As long as it looks good.

It just doesn't matter. You get the feeling that Darren Aronofsky is sitting on his high artist's steed and has completely forgotten that maybe he should have offered his audience a few little approaches that would make the jumbled events on screen even remotely comprehensible. Sure, there's something mesmerizing about the atmosphere of the film. The actors are great, even if Jennifer Lawrence's facial expressions seem a bit frozen, especially in the first half of the film. And yes, there are also some very intense scenes that really burn into you. But in the end you're just left with a completely unsatisfying What was that all about? that can't be explained by a certain understanding of art either.

It's to filmmakers' credit if they try to swim against the mainstream tide. But when they completely lose sight of their audience in the process, an exciting, thrilling cinematic experience quickly turns into self-indulgent shenanigans. And since that's exactly what happened with mother!, there's only one thing for it by any stretch of the imagination: only worth seeing for diehard Aronofsky fans!