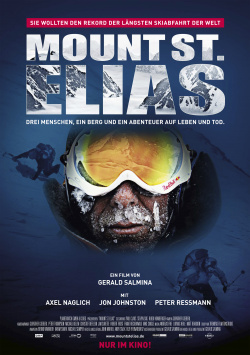 At an elevation of 5,489 meters, Mount St. Elias in Alaska is the world's highest peak of a coastal mountain range. With its sometimes near-vertical escarpments, Mount St. Elias is a major challenge for climbers, and many attempts to climb it have failed or even resulted in fatalities since the first ascent in 1897. So it seems all the more crazy that three alpine skiers, the Austrians Axel Naglich and Peter Ressmann, and the American Joe Johnston, are planning not only to climb Mount St. Elias, but also to ski down it. Gerald Salmina accompanied the undertaking with his camera and made a breathtaking documentary out of it, which was a complete success at the box office in Austria, and not without reason.

In "Mount St. Elias" the viewer witnesses how the three alpine skiers confront the completely unpredictable dangers that the mountain brings with it, and how not only their physical condition, but increasingly also their psyche is put to the test. Especially when they get caught in a blizzard during their first attempt to ascend and have to hold out in a makeshift snow cave in a confined space for several days, not knowing how long it will take to get to safety.

Here the completely different mental attitude of the two Austrians compared to that of the American is particularly noticeable. Even before this, the three had clashed during a test descent, but after the setback caused by the blizzard, it becomes clear that not each of the men is truly up to the challenges.

Inserted into eyewitness accounts surrounding dramatic events on Mount St. Elias, which claimed the lives of two skiers in 2002, Gerald Salmina depicts the efforts of Naglich, Ressmann and Johnston in breathtaking imagery that at times pushes the viewer deeper into the cinema seat than many a thriller or horror film manages to do. Although one questions the state of mind of the alpine skiers, especially in view of these images, in the end the daring men can only be thanked, because without their insanity we would not have been able to enjoy this exciting documentary.

Of course, special praise is due to the team. The images that cameraman Günther Göberl captured here on the mountain, although made under the most extreme conditions, are simply magnificent. If you liked films like "Am Limit", you will be thrilled by "Mount St. Elias". Absolutely recommended!