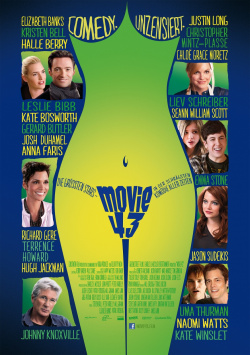 Especially in recent years, it has become almost the norm for us film journalists to sign a blackout agreement, agreeing not to report on a movie before a certain date. Usually this date is the US release date or is a few days before the theatrical release in Germany. This secrecy policy is often not really comprehensible, especially when it comes to films that have already been released in other countries. It could give the impression that the studio doesn't really believe in the quality of the film and thus wants to limit any form of negative criticism before the release weekend. The embargo policy (for online media) has now reached a sad climax with Movie 43. About this work may be reported namely only one day after (!!) the theatrical release.

But why is the cloak of silence thrown over this episodic comedy in such a way? Why are none of the stars promoting the film? The reason could be that Movie 43 seems predestined for a merciless slating. Because after only a few moments it's clear that every conceivable boundary of good taste is crossed quite far here. Political correctness? Not a chance! Sophisticated gags? Far and wide not in sight. It's all about bestiality, abuse, humiliation, faeces, racism and of course sex in all possible forms. The disgust factor is almost as high as the level of the Fremdschämen. And yet, Movie 43 is funny as hell in some moments - even if you almost want to be ashamed of admitting it.

Producers Charles B. Wessler and Peter Farrelly came up with the idea for the film many years ago. Inspired by the cult comedy Kentucky Fried Movie, the idea was to take the concept of politically incorrect comedy episodes and apply it to modern audience tastes. The legendary Zucker brothers (The Naked Gun), from whose minds Kentucky Fried Movie sprang, were to direct a third of the film, the Farrellys another third, and the South Park makers eventually the third portion. Unfortunately, the project was cancelled after the first planning phase, but always remained in the back of the producers' minds. It didn't take on new form until the concept was reworked: a series of sketches would now be staged, each directed by a different director and starring big-name stars.

And so, over the course of the last few years, a rather impressive array of talent has been assembled both behind and in front of the camera. Filmmakers like Brett Ratner (Rush Hour), Steven Brill (Mr. Deeds), Peter Farrelly (Crazy for Mary) or Steve Carr (The Department Store Cop) directed stars like Kate Winslet, Hugh Jackman, Uma Thurman, Gerard Butler, Naomi Watts, Halle Berry, Emma Stone, Richard Gere, Elizabeth Banks, Josh Duhamel, Seann William Scott, Johnny Knoxville or Anna Faris in a collection of mercilessly silly tastelessness. And therein lies the film's appeal.

Because watching all these Hollywood stars make unrestrained asses of themselves is pretty damn hilarious at times. True, there are some episodes that are just gross or not really funny. But a surprising number of the gags work really well on the strength of the cumulative star power alone. When Kate Winslet on a blind date with Hugh Jackman constantly walks close to nausea, when Naomi Watts and Liev Schreiber reveal their very own way of raising children, when Gerard Butler as an Irish leprechaun falls into the clutches of Johnny Knoxville or Halle Berry gets involved in a particularly drastic truth or dare game, then you may be extremely embarrassed again and again - but it is also impossible to avoid laughing at these completely absurd capers. However, this is not always hearty, but also shocked or mixed with disgust.

You should definitely have a soft spot for politically incorrect cinema, for crude comedy and for merciless fecal humor, in order not to want to leave Movie 43 after the first sketches already again. If you can make it through the early episode, in which Anna Faris offers her lover Chris Pratt a very special token of love, you can safely stay until the end. Because it doesn't get much more unsavory than that, even if it still falls short of that level with nice regularity.

If you want to know why Richard Gere is said to have desperately tried to get out of the project yet, why the stars don't dare to advertise the movie and why the press was muzzled until after the movie's release, if you like it crude and tasteless and can laugh all the louder the nastier and more shocking the gags get, then you should definitely go to the movies and join the three kids of the frame story on their quest for the mysterious Movie 43. Not worth it, but still - with a lot of blushes on your face: worth seeing!