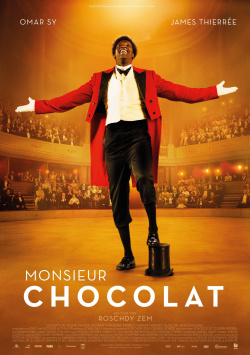 France late 19th century. Century: in a small traveling circus, the once-successful clown Georges Footit (James Thierr&egrave;e) discovers Rapha&euml;l Padill, known as Chocolat (Omar Sy), who has escaped from slavery. He quickly recognizes his talent and comes up with a revolutionary idea: Together with him, he wants to bring the first black and white clown duo on stage. The stage show of the two quickly becomes an absolute crowd puller and soon brings them a permanent engagement in Paris. Although he now enjoys popularity and wealth, Chocolat is increasingly unhappy with his role. He tries to numb his dissatisfaction with gambling and opium, which drives him to the brink of bankruptcy. But his love for dedicated nurse Marie (Clothilde Hesme) and the opportunity to be the first black artist to play Othello could give his life and career a whole new meaning.

With Monsieur Chocolat, actor and filmmaker Roschdy Zem memorializes a great but largely forgotten French artist. With a superb set, great costumes and convincing actors, he traces the high rise and deep fall of Rapha&euml;l Padill, who was celebrated as the first black artist on a French stage. Although he sticks closely to the conventional forms of other biopics in terms of dramaturgical structure and also takes quite a few liberties, the drama as a whole feels very involving and authentic. Zem not only succeeds very well in transporting the audience to the Paris of Belle &Eacute;poque. He also makes his audience feel how much the jubilation has caressed Chocolat's soul while the everyday humiliations on and off stage have dragged him into an ever-deepening abyss.

Omar Sy is very good at delivering the various facets of the clown. On the one hand, he exudes the very charm that made him so charming and charismatic in Pretty Best Friends. On the other hand, he is also able to embody the dark, self-destructive side of the artist in a believable way. So as an audience member, you rejoice with him at every little moment of happiness and suffer with him at every evil eye, every insult, and every step toward the abyss. It is this rousing play that saves the film even over its somewhat tamer moments.

Besides the life of Monsieur Chocolat, however, the biopic also tells the touching story of a very special friendship, which at many moments seems to be just a professional relationship, but which in reality was much more. The fact that Zem takes some very obvious liberties with the real-life events here in particular is absolutely bearable due to the emotional impact of his production. The chemistry between Omar Sy and James Thierr&eacute;e - a grandson of the great Charlie Chaplin - is spot on and makes especially the last scene between Chocolat and Footit quite great emotional cinema.

Even if Monsieur Chocolat doesn't reinvent the wheel and gets lost too much in common clichés in some moments, Roschdy Zem has succeeded in making a really gripping, entertaining and also moving biopic overall, which above all shows that there is a thoroughly versatile talent in Omar Sy. For this there is a very clear: Worth seeing!