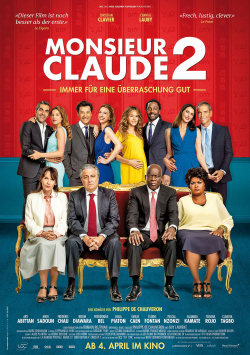 Monsieur Claude (Christian Clavier) and his wife Marie Verneuil (Chantal Lauby) have just about come to terms with the fact that their four beautiful daughters have chosen husbands who are so unlike their traditional ideas: S&eacute;gol&egrave;ne (Emilie Caen) has married the Chinese Chao (Fr&eacute;d&eacute;ric Chau), Isabelle (Fr&eacute;d&eacute;rique Bel) married Rachid (Medi Sadoun), a Muslim, Odile (Julia Piaton) married David (Ary Abittan), a Jew, and Laure (Elodie Fontan) married Charles (Noom Diawara), an African. After initial despair, Claude and Marie wanted to be extra cosmopolitan and even visited their sons-in-law's hometowns. All well and good - until the daughters announce their intention to move away with their new families. Claude and Marie must prevent this at all costs - and get help from an unexpected source.

Comedies about multicultural society have been booming for several years. The French hit Monsieur Claude and his daughters was one of the most successful films to tackle this topic in Germany. After all, director Philippe de Chauveron and his co-writer Guy Laurent were able to draw on a wealth of experience in playing with clichés and stereotypes with five different cultures. After the film attracted over 12 million viewers in France and was also a real box office hit in Germany with almost 4 million visitors, a sequel was actually inevitable.

Sure, strictly speaking, Monsieur Claude 2 is one of those typical second parts that actually only copy their predecessor and slightly vary the familiar. Still, the whole thing works really well once again in this second attempt - almost as well as it did with the original. This is not only due to the well-rehearsed ensemble, but also to the script and the fast-paced staging. The dialogue is once again very funny and doesn't care at all about political correctness, without ever really being offensive. In these highly sensitive times almost a feat - and it feels so good to be allowed to laugh heartily about it.

The production then thankfully also avoids swinging the moral club too obviously. Rather, with a lot of charm, humor and cordiality, it is shown that we humans are basically all the same, despite many differences. A message like this, which appeals to humanity and cosmopolitanism, doesn't always have to be spread with gloom and dreariness, just to send the feuilleton and festival juries into affected raptures. If you give it a high entertainment value, as happened here, it reaches a lot more people and also gives a lot of pleasure. And you can't have enough of that at the moment, can you? Therefore, there is for this light-footed and really successful sequel also quite clearly one: Absolutely worth seeing!