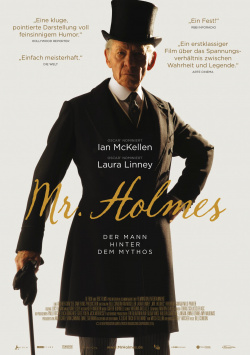 Sherlock Holmes (Ian McKellen) used to be the biggest detective in England. His mind was a true master when it came to recognizing the smallest details and combining them into an overall picture, which ultimately always resulted in the right resolution. But now, at the age of 93, Mr. Holmes is just an old man who has completely retired and who only cares for his bees. But in seclusion, the master detective has to deal with his worst enemy to date: the steadily progressing dementia. But before the veil of oblivion finally lays over his brilliant mind, Sherlock Holmes is determined to solve the case that led him thirty years ago to give up his job as a detective. With the help of eleven-year-old Roger (Milo Paker), the son of his housekeeper Mrs. Munro (Laura Linney), the old man wants to put together the pieces of the puzzle he can still remember, in order to finally find out the truth. But he still has enough time?

Sherlock Holmes is currently more popular than it has been for a long time. After the successful cinema films of Guy Ritchie, the modern TV adaptation with Benedict Cumberbatch and Martin Freeman in particular provided an extreme surge in popularity. "Mr. Holmes" offers another unusual variation of the well-known material, in that the film visits the retired hero from the books of Sir Arthur Conan Doyle. Under the direction of Bill Condon ("Dreamgirls") Holmes has become a grumpy hermit who doesn't have the sympathies of his fellow men on his side. Especially his housekeeper gets on his nerves with his bossy tone. But Mr. Holmes is also a broken man who fights desperately against forgetting to finally find out the truth about his last case.

A little boy of all people manages to break the hard shell that Holmes has built around him. An unusual friendship develops between the two, which the great Ian McKellen and the young Milo Paker ("Ghost Hunter") credibly transport onto the screen. It's thanks to them and the other actors that "Mr. Holmes", despite some tough moments at the end, has become a very stirring cinema that entertains and emotionally touches in a subtle, reserved way. However, tension should not be expected here. This is the responsibility of the other Holmes incarnations, who are so ghostly in various media. This Holmes is rather something for lovers of subtle dramaturgy, light humor and great acting.

Very beautiful is the small allusion to the wonderful 80s movie "The Secret of the Hidden Temple", in which Sherlock Holmes had to solve his first case as a student. The main actor from this film, Nicholas Rowe, is seen here in a short sequence in the film adaptation of a Sherlock Holmes adventure that Mr. Holmes watches in the cinema. And if you pay close attention, you will also discover other allusions to the classic Holmes from 221B Baker Street. But first and foremost, the story draws its appeal from the assumption that Holmes is a real character who has become a myth through the novels of his friend Dr. Watson, who wants to prove his own greatness here at the end of his life.

Who appreciates quiet narrative cinema and wants to see an outstanding Ian McKellen, can't get past this unusual Sherlock Holmes variant. But if you expect the tempo, the wit and the tension of "Sherlock" and Co., you might be disappointed by the aging "Mr. Holmes". Nevertheless there is a very clear one from me: worth seeing!