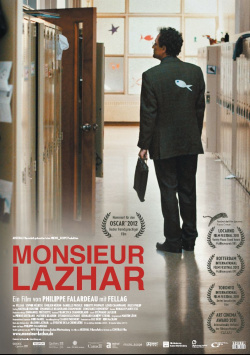 A Quebec elementary school is struck by a tragic incident: one of the teachers hangs herself in her class and is discovered by one of the students. The headmistress is overwhelmed with the situation, on the one hand she has to make sure that the children get psychological care, but on the other hand she has to find a replacement and restore the school routine as soon as possible. It comes just at the right time when Bazhir Lazahr (Fellag), who comes from Algeria, applies for the job. Although the man has no references and hasn't been in the country long, he makes a competent impression, which eventually lands him the position of substitute teacher. Although his teaching methods initially meet with little approval from the children, Monsieur Lazahr gradually succeeds in winning the trust of his pupils and thus helping them to come to terms with the suicide of their teacher. But what no one at the school suspects is that the gentle Bazhir himself bears a heavy burden from his past and could also be expelled from the country at any moment...

With his Oscar-nominated drama Monsieur Lazhar, director Philippe Falardeau has achieved a real feat. The story the film tells is full of sad elements, drama and tragedy. The suicide of the teacher, traumatized children, the painful memories Monsieur Lazahr carries around with him and the expulsion that always hovers threateningly over him are not really ingredients that feel-good cinema is made of. And yet the film has a thoroughly positive, optimistic vibe that leaves the viewer happy even without an all-too-obvious happy ending.

The restrained staging, which repeatedly spices up the dramatic events with quiet humour, is as much responsible for this as the authentic acting of the cast. The Algerian comedian and writer Fellag carries the story with a lot of charisma and engaging charm, refrains from putting too much sentimentality into his play in the decisive moments, so that his feelings always remain comprehensible. This intensifies the emotional impact of the story enormously.

The superbly chosen child actors also play a significant part in making the film work so well. Director Falardeau has gotten some very authentic acting out of the children, who come across as completely believable not only in the smaller emotions, but also in the larger moments of feeling. The interplay between the children and Fellag lends the film an endearing magic that viewers are only too happy to surrender to.

Monsieur Lazhar may be a small, actually completely unspectacular film. But the drama impressively proves that sometimes it's the small stories that have the biggest impact on audiences. If you appreciate entertaining, soulful and superbly acted programme cinema fare, then this is definitely a film not to be missed. Worth seeing