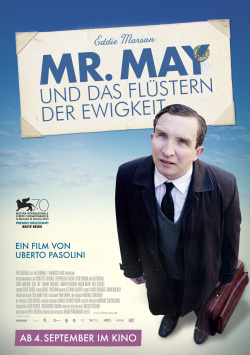 Mr. May and the Whisper of Eternity

John May (Eddie Marsan) is a loner who lives only for his job: making sure lonely deceased people are given their final respects. He meticulously searches for relatives still alive, writes the eulogies and even attends the funerals himself. Mr. May invests a lot of effort and, above all, time in his work - time that is completely unnecessary in the eyes of his superiors. After all, time is money, and money is simply not worth dead bodies that no one knows anymore. And so Mr. May's job is summarily eliminated, leaving him only time to complete one last case. In doing so, Mr. May must try to find out more about a certain Billy Stokes, who died in a squalid apartment directly across the street from May's own home. This quest becomes an exciting journey for the loner that will also be a drastic turning point for his own life.

There is one word that I try to avoid in my reviews when possible. It is the word laconic, which in my mind is all too often just the feuilleton transliteration for boring. But every once in a while, even I can't help but use the term to describe a character or the humor of a film. Mr. May and the Whisper of Eternity is such a film. Eddie Marsan's portrayal of the very introverted John May practically screams laconic into the audience from the first shot. And yes, for many a viewer the word will mean nothing but yawning boredom in this case as well. But on the other hand, this absolutely withdrawn performance, the often motionless facial expression fits perfectly with the character of Mr. May and his reclusive nature.

Mr. May and the Whisper of Eternity is a fine film, though not a true feel-good movie. Director Uberto Pasolini (Game of Dreams) has directed a moving story about loneliness in life and in death, about passion and about forgiveness. He repeatedly juxtaposes very bleak images with very beautiful moments and lightens the drama with wonderfully unexciting humor. Although there always seems to be a big cloud of sadness hovering over Mr. May, the film manages to put a smile on the viewer's face every now and then.

In the end, the film proves that beauty can be found even in sadness, that every ending can also mean a beginning and that it is worth enjoying every moment in life, no matter how small, because you can never know when it will end. One has to get involved with the very slow staging in order to not only recognize the poetic side of this story, but also to be able to let oneself fall into it. Only then is Mr. May and the Whisper of Eternity able to exude a certain magic that lasts even after the credits roll. For those who don't succeed, however, it will be proven once again that laconic is really just a euphemism for boring. Worth seeing

Cinema trailer for the movie "Mr. May and the Whisper of Eternity (Großbritannien/Italien 2013)"
Loading the player ...