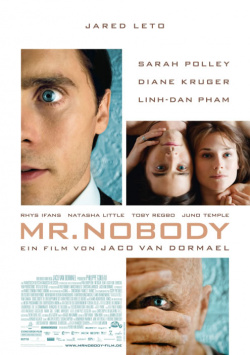 Thirteen years after his last feature film, Jaco Van Dormael, director of the award-winning films "Toto the Hero" and "On the Eighth Day" presents "Mr. Nobody" yet another minor masterpiece.

In a world where people no longer die thanks to constant cell renewal, Mr. Nobody, the last mortal man, remembers his past. Of a life filled with important choices and opportunities. He remembers standing on the train platform as a young boy with his newly separated parents, having to decide whether to stay with his father or leave with his mother. What are the consequences for his life of this decision? Playing out in the mind of Mr. Nobody are the different versions of his life, which has once again come to a crossroads with his choice of the right woman. Is Anna, his great love, the one? Or rather Elise, who is passionate but also extremely complicated? Or is it Jeanne, with whom his life could be almost perfect? What life has Mr. Nobody really lived? What is dream, what is reality? One thing Mr. Nobody knows for sure: no matter what he chose, either possible life would have been worth living.

"Mr. Nobody" is a surreal rush of images that can hardly be described in words. This film is not just seen, it is experienced. Wildly, the plot jumps back and forth between the distant future, the present, and the past, constantly shuttling between the various possibilities without giving a single hint as to whether any of them represent actual reality. In between, Van Doramel occasionally inserts small image collages or unceremoniously relocates the action to Mars.

This may all sound rather confusing now. And it is to a certain extent. Because once you get into this film, it becomes clear that every word and image here meshes together to make a magnificent, poetic whole. It's no wonder that over a year was spent on the editing of this ambitious work alone. The way the different levels of action, reality and time are woven together is a real feat. But the images conjured up on the screen here also contribute to the fascinating overall picture.

But what actually makes "Mr. Nobody" so wonderful in the end is that behind the artful façade are hidden some very simple truths that are probably very rarely conveyed in this way in cinema. Van Doramel has succeeded in conveying the feeling of great love in a simple visual language, but one that gets to the heart of this wonderful feeling. These are images full of poetry, full of passion and tenderness, which burn themselves deeply into the mind and heart of the viewer.

"Mr. Nobody" is not a film for a broad audience, for that the whole thing is simply too convoluted, too complicated and too unwieldy. But if you simply surrender to the rush of images and get involved with the convoluted narrative, you will be rewarded with a cinematic experience that unfortunately can be experienced far too rarely. Absolutely recommendable