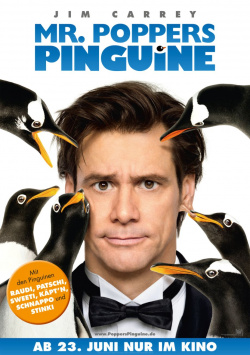 After his attempt to show some real acting chops once again in the smaller production I love you, Phillip Morris was appreciated by very few viewers, Jim Carrey now plays it safe again by taking the lead role in a crowd-pleasing family comedy that perfectly showcases both his rubber face and his talent for classic slapstick.

Based on the obese children's book by Richard and Florence Atwaters, Mr. Popper's Penguins tells the story of successful New York businessman Tom Popper (Carrey), whose life seems to have room only for his career. No wonder his marriage to Amanda (Carla Gugino) has fallen apart and he rarely has contact with his children. But Tom's life takes a drastic turn when he receives an unusual inheritance from his recently deceased father, a real adventurer: without warning, a real penguin stands in Tom's luxury apartment. That's not all: just when Mr. Popper thinks he has the situation under control, five more penguins arrive at his house. When Tom's son thinks the animals are an extremely original birthday present, the newly minted bird father is forced to keep his unwanted roommates. Chaos is bound to ensue.

When the first bird poop joke is meant to provide laughs within the first few minutes of the penguins' appearance, and one of the penguins has been named Stinki for exactly the reason you can now imagine with certainty, it should be clear that Mr. Popper's Penguins is not really highbrow head-scratching, but rather family-friendly entertainment of the simpler kind. The only really big surprise of the comedy is that it's not as flat and silly as similar works from the recent past. Compared to, say, Pure Furry Thing, Girls Club director Mark Waters' animalistic fun seems downright profound.

However, it's largely thanks to Jim Carrey that the film works quite well despite its flaws and lack of content. Carrey runs at full speed in the company of his animal co-stars, but keeps a pleasingly low profile with silly grimaces. Some moments, which would have been extremely silly or even embarrassing with a different leading actor, are very funny here. In addition to Carrey, we also have to praise veteran star Angela Lansbury (Murder is Her Hobby). The scenes between Ms. Van Gundy, played by her, and Jim Carrey's Tom Popper are - apart from a few penguin moments - the comedic highlights of the film.

Bottom line, Mr. Popper's Penguins is decent, harmless family entertainment that could have been a lot more charming and funny, but also considerably more flat and annoying. If you liked The Fool and similar harmless Carrey comedies, you can safely head to the cinema for a visit to Mr. Popper's Penguins. Worth seeing