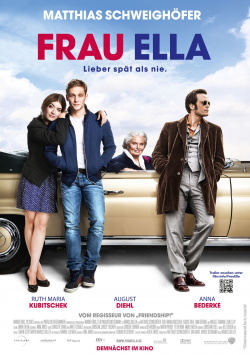 Director Markus Goller has taken a temporary leave from his Bavarian homeland after the surprise success of Eine ganz heiße Nummer to work again in Berlin and France with Matthias Schweighöfer, the lead actor of his first hit film Friendship! Based on the novel of the same name by Florian Beckerhoff, Goller's Frau Ella tells the story of Sascha (Schweighöfer), who crashes his taxi after an argument with his girlfriend Lina (Anna Bederke) and ends up in hospital. It's bad enough that Lina has opened up to him about becoming a father, although Sascha is nowhere near ready for such a responsibility. Now he also has to share the hospital room with snoring senior citizen Ella (Ruth Maria Kubitschek).

At first, Sascha is completely annoyed by the situation. But he soon befriends the lovely and somewhat talkative Mrs. Ella and when he finds out that she has let the doctor talk her into a very dangerous eye operation for her, the former medical student makes a drastic decision: he kidnaps Mrs. Ella from the clinic and hides her in the apartment he shares with his best friend Klaus (August Diehl). In the presence of the two young men, the 87-year-old woman really blossoms. When she tells the friends about her one true great love, whom she lost sight of after the Second World War, Sascha and Klaus decide to take a journey into her past with Frau Ella - a journey through which their future will be decisively changed.

At the beginning, Frau Ella still bears clear traits of a typical German comedy from the house of Schweighöfer or Schweiger. The somewhat too intrusive mixed, very interchangeable film music, warm, slightly over-stylized colors and rather directly staged humor suggest that Ms. Ella strikes in a very similar notch, such as Schlussmacher or Kokowääh. But apart from the obvious stylistic similarities, the story quickly goes its own way. Admittedly, these aren't really new and free of all-too-familiar clichés either. Still, Ms. Ella works very well in the end, thanks in particular to the actors and their well-harmonized acting.

The film thrives on the unequal pairing of Schweighöfer/Kubitschek, on the clash of youthful hotheadedness and old-age wisdom, and on the divergent charm and wit of two generations. It is a very effective symbiosis in which each actor can profit from the strengths of the other. Although at first glance Matthias Schweighöfer only delivers a slightly altered version of the characters from his last comedies, his performance in the interplay with Ruth Maria Kubitschek somehow seems very refreshing and absolutely fitting and not, as might have been feared at the beginning, a little worn out by now. But Ruth Maria Kubitschek is also at her best in the interplay with her younger co-stars and can fully convince both in the more humorous, as well as in the rather quiet, dramatic scenes.

Great praise also deserves August Diehl, who as a somewhat cranky buddy of Sascha and notorious permanent single delivers a very charming and often really endearing funny performance. The convincing trio plays their way confidently through a solid script that could have used a little more bite and surprises here and there, but overall is sufficient to provide viewers across generations with nice, entertaining entertainment. Markus Goller has staged a successful mixture of straight humor and softer tones, which is not particularly profound, but very likeable. If you like cinema comedies that don't go for the big laughs, but rather for restrained wit and also make use of some sentimentalities here and there, you should definitely join Ms. Ella and her companions on the entertaining road trip to France. Worth seeing