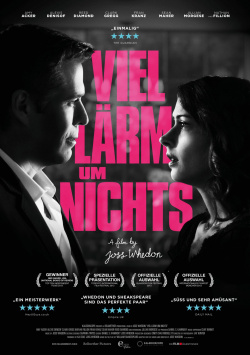 Much Ado About Nothing

This story has been told countless times on theatrical stages around the world, on television, and on the silver screen - yet it is always beautiful and amusing.Turbulent days begin at the home of Leonato (Clark Gregg), the governor of Messina, when he is visited by his good friend Don Pedro (Reed Diamond) after a successful campaign against the latter's rebellious brother Don Juan (Sean Maher). For Claudio (Fran Kranz), one of Don Pedro's two officers, falls madly in love with Leonato's daughter Hero (Jillian Morgese) shortly after arriving, and after sympathetic encouragement from Don Pedro, the man of the house quickly agrees to a wedding. Love is in the air, and Beatrice (Amy Acker), the governor's niece, and Don Pedro's officer Benedict (Alexis Denisof) are to benefit from it as well. Too bad the two seem to be at odds with each other. But Leonato, Don Pedro, Hero, and Claudio plan to use a ruse to make the two fall in love. For Don Juan, this is all too much of a good thing. He wants to prevent Hero and Claudio's wedding at all costs. Together with his allies Konrad (Riki Lindhome) and Borachio (Spencer Treat Clark), he spins a plot that could turn the merry goings-on at the estate into a bloody tragedy.

William Shakespeare's Much Ado About Nothing has long been a dream project for Joss Whedon. And since he was contractually guaranteed a short vacation between the shooting of The Avengers and post-production, he unceremoniously used the free time to shoot in his own home for 12 days. With a budget the size of what went into catering The Avengers in one day and a good-humored troupe of good friends, Whedon directed what has to be one of the most unusual and charming Shakespeare adaptations in recent years. While his script sticks closely to the original text, the setting is in the present day. Such a stylistic discrepancy is nothing new, and has, after all, been employed by Baz Luhrman in his gaudy Romeo & Juliet variant. Still, Whedon's just feels refreshingly different.

Admittedly, the staging does take some getting used to at first, which is also intensified by the black-and-white look. But it's hard not to be infected by the joy of acting that all the actors exude. The actors, many of whom have worked with Joss Whedon before on one of his TV or film projects, harmonize perfectly with each other, giving the whole film an extremely infectious lightness. Especially with Alexis Denisof and Amy Acker, between whom already in Whedon's Angel the sparks flew, this is extremely positively noticeable.

In addition, you also feel as a viewer that Joss Whedon loves the template. Time and again over the years, he and his wife, producer Kai Cole, have invited friends to their homes for Shakespeare readings. This film is the logical continuation of this tradition, with which Whedon pays tribute to the timelessness of Shakespeare's texts in a wonderful way. But the film is not only a testament to a great deal of passion, but also to Whedon's enormous talent. What he has created here in a very short time in the few breaks that remained for him during the Avenger production, as a director, screenwriter, producer and composer, bristles with such joie de vivre, playfulness and wit that you really have to wonder where Whedon has mustered the energy to be able to direct something so enchanting virtually in passing.

Who likes the very special humor of Joss Whedon and just wants to experience William Shakespeare in a completely new way, should not miss this low-low budget contrast program to the million dollar heroes from Marvel. Perfect good mood cinema for soul and mind - and for that there must be of course an Absolutely worth seeing!

Cinema trailer for the movie "Much Ado About Nothing (USA 2012)"
Loading the player ...