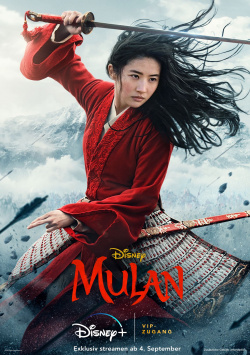 Actually, the live-action adaptation of the animated classic "Mulan" should have already come to our cinemas at the end of March. After several start postponements, the film will now be released for an additional fee on the streaming platform Disney + - actually a pity, because the visually stunning epic is made for the big screen. It tells the story of the courageous Mulan Hua (Yifei Liu), who does not want to submit to social conventions. Getting married just because a young woman has to? For Mulan, it's out of the question. When her ailing father is drafted to fight enemies from the north at the behest of the powerful emperor, she, as his only child, decides to pretend to be a man and follow the draft order instead. Not only does she face the harshest of trials in the imperial army. She must also watch every second to make sure her lie is not exposed. In the process, she realizes her true potential - but is it really enough to return home as a respected warrior?

Director Niki Caro has accomplished something with her version of "Mulan" that previous live-action remakes of popular Disney animated classics have failed to do: she's created a completely original work that's pleasantly far removed from the original. Songs are dispensed with here, as is the popular dragon Mushu. As a result, this live-action adaptation lacks almost all the elements that would lighten up the action. Humor and child-friendly characters can be found here rather less. But instead some breathtaking pictures and a message, which is strengthened by the rather adult, serious production still in its effect.

And here lies exactly the problem with the exploitation of the film. It may be commercially understandable that Disney is exploiting "Mulan" on Disney+ for an additional fee - even in countries where theaters are actually already open again. But it's not just that the theaters don't get anything from the extra fee. The film also loses a lot of its power if it can't be seen on the biggest possible screen. These valid criticisms aside, Niki Caro's version of history has turned out to be a really good film. She has created a gripping historical epic with fantasy elements that scores points with a strong heroine and some rousing moments.

There are admittedly scenes here that were carried over one-to-one from the animated version. On the other hand, however, Caro proves that it is quite possible to tell even well-known material in such a way that completely new aspects come to light and the characters become more complex. In this respect, a remake is really justified here, because it doesn't copy the original, but reinterprets it. And for that "Mulan" gets a fully deserved one: Absolutely Worth Seeing! Whether that justifies the cost of unlocking it on Disney+ is ultimately for everyone to decide for themselves.