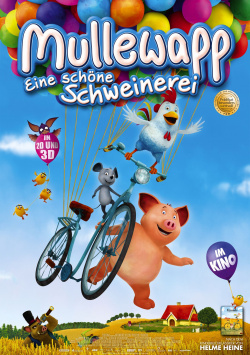 The Friends books by Helme Heine are a huge success all over the world. The lovingly drawn and narrated stories about Johnny Mauser, Franz von Hahn and Pig Waldemar delight millions of readers. Now, for the second time, the friends from the Mullewapp farm are storming the big screen.

In their second feature film, Johnny Mauser (Ralf Schmitz), Franz von Hahn (Michael Kessler) and the other animals on the farm have to do everything they can to stop the hungry pig Waldemar (Axel Prahl) from eating his birthday cake before the big party. As if that wasn't stressful enough, the nasty boar Horst von Borst also finds out that there is a delicious strawberry cake at Mullewapp. He uses a ruse to gain access to the farm and also sows discord between the animals. And as Horst von Borst gets closer and closer to the cake, the three friends are unintentionally whisked away on an adventurous bike ride and far away from Mullewapp - too far to be home in time for the big feast.

The first Mullewapp film from 2009 was really a very endearing children's film that proved that even without the most modern animation technology, really beautiful stories can still be told that captivate their target audience. It was simply wonderful to observe that a pleasantly old-fashioned animated film like this, which manages without hectic chases and overloaded effects, could trigger such enthusiasm among young viewers. By targeting Mullewapp specifically at younger children, the film was also able to cater fully to their viewing habits. And the makers succeeded absolutely convincingly. The little ones are not slain here by loud, fast and gaudy images, but thrilled with a simple, beautiful and lovingly implemented story.

Mullewapp - Eine schöne Schweinerei unfortunately no longer follows this example. The loving cartoon animation has given way to a rather sterile computer animation that lacks any form of charm. The characters are animated much more expressionless than in the first part. The humor is limited to the usual fart and burp jokes, and even the usual 3D gimmicks are used to exhaustion here. Of course, little kids laugh at certain things all the time. But the fact that this is presented rather lovelessly and so completely unimaginatively in the second attempt, especially after the nice first film, is a real shame. Even sadder, however, is that the film then also received the rating Especially valuable. Because it really isn't.

May be that there are enough children who are so conditioned by now that they only watch 3D animated movies. And it may also be that kids enjoy the very simplistic story and its gags. But that doesn't make this second trip to Mullewapp a good children's movie. If you want to see one, you'd better put the DVD of the first part in your little ones' hands. For this work, however, there is only very conditionally still a: Worth seeing!