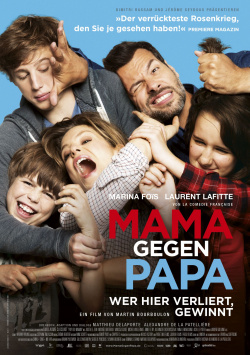 Florence (Marina Foïs) and Vincent (Laurent Lafitte) are actually the perfect couple: they are professionally successful, have three well-behaved children and seem to lead a very harmonious coexistence. But the fire of passion between them has simply died out over the years. And so the two have decided to get divorced. Separation of property and custody issues are to be settled in a civilized and amicable manner, of course. But then both get fantastic job offers, which would make a longer stay abroad necessary. But which of the two should forego their unique opportunity and take care of the children instead? This question can neither be solved with reason nor with mutual kindness. And so Florence and Vincent do their best to present themselves as the perfect raven parents, so that the children will want to stay with the other. And so a merciless war of the roses breaks out, which threatens to take on ever more absurd proportions...

Mom vs. Dad begins like a typical French family comedy. Quite amusing, a bit over the top and also a wee bit annoying. The actors seem charming, but their acting a bit over the top. And the premise sounds nice, but really not new. After the first two scenes you're inclined to dismiss the movie as just another nice, but also trivial little movie that you can recommend to viewers with a soft spot for harmless entertainment from France. But then this impression changes abruptly. Suddenly the humor gets really nasty, the story gets more and more bizarre and the acting of the actors gets more and more revved up. And that's really a lot of fun.

Director Martin Bourboulon eventually says goodbye to any political correctness and lets his protagonists become the worst raven parents you can imagine. The mother spices up her food with washing-up liquid, the father moves into a small hovel on the railway line, there are embarrassing appearances at parties, a visit to the strip club or a dinner with the mother's supposed new lover. A real nightmare for the kids and a lot of fun for the audience. The witnesses an ever-escalating war of the roses that makes even Michael Douglas and Kathleen Turner's 1989 bickering look like a well-behaved squabble.

urely, the whole thing is not particularly realistic, especially in the second half of the film. And the ending is also a bit of a disappointment, coming off as far too bravura and conventional compared to the rest of the film. But this only marginally diminishes the fun factor. For long stretches, the density of bad jokes is so high that you can hardly get out of laughing as a viewer - provided, of course, you can laugh at things that in real life would fortunately immediately intervene the youth welfare office. Then this fight for the dream job and thus against the custody makes really good mood. Therefore, for all lovers of French comedies of the over-the-top, nastier kind, the duel of mom against dad is absolutely worth seeing!