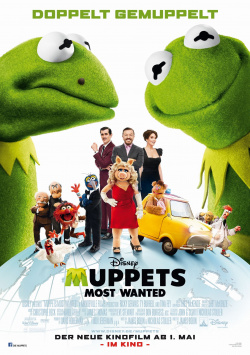 Now all the puppets are dancing, make light on the stage: After the curtain rose very successfully for the Muppets with their comeback film in 2011, the fun puppet troupe may once again complete another cinematic adventure under the direction of James Bobin. This time, they're looking to expand their newfound popularity all the way to Europe. Crafty agent Dominic Fieslinger (Ricky Gervais) wants to help them do just that. He has arranged gigs for them in some of Europe's biggest cities. Although Kermit is a little skeptical, he lets himself be talked into a Muppet tour abroad. Not a good decision, because the trip is just part of an elaborate plan by the nasty jewel thief Constantines, who swaps his identity with Kermit's without further ado. And so the popular frog is captured in Berlin as Constantine and transported to a Russian prison while the crook takes his place. But Kermit is convinced: Miss Piggy and his best friends Fozzie Bear, Gonzo and Co. will realize that the wrong frog is leading them through the show and that they will free him from the clutches of the crazy prison guard Nadya (Tina Fey). If he isn't mistaken about that.

While the 2011 Muppet movie was primarily a love letter to the classic Muppet Show, and as a result clearly drew on that beloved format in terms of style and humor, Muppets Most Wanted takes a slightly different approach. Its pacing and humor is much more reminiscent of the first Muppet films, even if their quality isn't quite matched here. The gag density is a little higher than the last film, but some of its subversive humor and charm are lost. Muppets Most Wanted serves up its gags much more obviously, though this also means that some of the laughs do fall a little flat. But fortunately, there are far more humorous bull's-eyes than pipe-drops.

The story is very turbulent and is filled with celebrity guest stars, who at times are only seen for a few seconds. From Lady Gaga to Salma Hayek, James McAvoy, Usher, Christoph Walz and even Til Schweiger, the celebrities here give each other a run for their money almost every minute. It's very funny for the most part, but also feels a bit overstuffed in places. It's fun to discover all the mini cameos, but in the end you wonder if it wouldn't have been better if the makers had focused a wee bit more on the script rather than the numerous guest stars.

The Muppets' human co-stars in this film are British comedian and The Office creator Ricky Gervais, 30 Rock star Tina Fey and Ty Burrell, known from the comedy series Modern Family. While the latter, as a French Interpol agent, seems a bit like a weak copy of Steve Martin's Inspector Clouseau, Gervais and Fey are also completely upstaged by the Muppets. The somewhat over-the-top acting of the three human leads doesn't exactly have a positive effect on the overall impression of the film. But as soon as the animal appears again, Fozzie tells bad jokes or Gonzo wants to create excitement with his new act, such weaknesses are quickly forgotten.

Because in the moments when the Muppets are fully in focus, Muppets Most Wanted is a wonderful gag-fest, revealing once again why Jim Henson's (1936-1990) lovable creations have enjoyed unwavering popularity in their various incarnations for well over four decades. And even if their latest movie isn't the best thing we've seen from the Muppets so far, the many positive aspects are enough to give their turbulent European tour a clear "worth seeing" rating, despite some minor weaknesses. And if you get to the cinema in time, you will also get to see an extremely amusing short film from Monster University!

Cinema trailer for the movie "Muppets Most Wanted (USA 2013)"
Loading the player ...