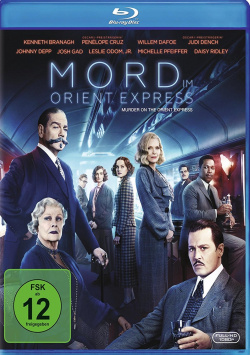 Murder on the Orient Express - Blu-ray

Film: Actually, the brilliant investigator Hercule Poirot (Kenneth Branagh) wanted to use the trip on the Orient Express for a long overdue time out. But then shady art dealer Edward Ratchett (Johnny Depp) is murdered and it quickly becomes clear: the culprit must still be on the train. When he is lifted off the tracks by an avalanche and stuck in the snow, Poirot has no choice but to end his sabbatical and put his dreaded sleuthing skills to work. But who would have had a motive to kill Ratchett? His alcoholic secretary Hector (Josh Gad), for instance? Or the unassuming governess Mary Debenham (Daisy Ridley)? Are the Spanish missionary Pilar Estravados (Penelope Cruz) or the somewhat garrulous widow Caroline Hubbard (Michelle Pfeiffer) also suspects? Poirot still can't figure out who is behind the murder. He only knows one thing: nothing here is as it seems.

Kenneth Branagh delivers what is now the fourth film adaptation of Agatha Christie's 1934 novel Murder on the Orient Express. The best-known adaptation to date is undoubtedly director Sidney Lumet's 1974 adaptation, in which Albert Finney investigated as Poirot against a top-notch cast of greats including Sean Connery, Ingrid Bergman, Anthony Perkins and Vanessa Redgrave. In terms of star power, Branagh's version can certainly hold its own. In terms of casting, he actually got everything right. Whether it's Johnny Depp in a small but important role, Star Wars heroine Daisy Ridley or the venerable Judi Dench - they all deliver good to very good performances. Branagh himself is a good Poirot - apart from the overdone moustache - even if he will never be able to hold a candle to Peter Ustinov. Ustinov, who never solved the Orient Express case as Agatha Christie's master detective, remains simply the best Poirot ever.

The production is classic in the best sense of the word. Sure, Branagh takes a few liberties here and there and sprinkles in a smattering of humor, which probably only very big admirers of the book might take offense to. Otherwise, however, he sticks closely to Christie's novel and delivers a visually superb old-school crime film that still entertains very well even if you already know the resolution. The script is entertaining enough and the atmosphere created by the sets, camera and music is so engaging that there really is no room for boredom.

Sure, this is not a perfect film, nor is it the best adaptation of the novel. Nevertheless, this Murder on the Orient Express is quite great entertainment cinema that scores with an elegant old-fashioned staging, great actors and an always exciting story. Yes, we didn't really need this version. But when a material is recycled so convincingly, the lack of originality bothers little. And that's why, despite a few minor weaknesses, there's a very clear recommendation: get on board and enjoy a thrilling ride on this Orient Express! Absolutely worth seeing!

Picture + Sound: The picture is absolutely clean and also features very good detail sharpness in many scenes. The slightly artificial-looking color scheme is powerful and shows its particularly atmospheric side, especially in the outdoor scenes at the beginning of the film. So there are few notable flaws to complain about here, just as there are with the sound quality. The DTS 5.1 mix is pleasantly lively and can convince again and again with good surround moments. For this, there is an overall more than satisfied: good!

Extras: A rather extensive bonus package has been put together for the Blu-ray. Things kick off with a rather entertaining and interesting audio commentary by Branagh and screenwriter Michael Green. The two have a lively conversation about the adaptation of the classic and the filming. The two then continue this conversation during the 13 dropped, extended, and alternate scenes (approx. 16:40 min.). Their commentary can be optionally added to these scenes. You can also see an alternative beginning and a visually really great scene at the departure of the Orient-Express.

Conclusion: Murder on the Orient Express is a classic murder mystery with a great cast and some high show values, so even if you already know the outcome from the book or a previous film adaptation, the whole thing still entertains very well. The film was so convincing at the box office that Branagh is already planning the next Christie adaptation. The Blu-ray of the hit movie presents the film in good picture and sound quality and also has some really good extras on board. For this, it more than deserves a: Absolutely Recommended