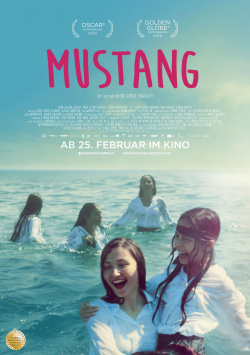 It is summer in a small Turkish village. Lale and her four sisters are enjoying the sun and the sea. They are laughing, romping and frolicking with their classmates. But this brief moment of exuberance has fatal consequences. For their conservative father, it is a scandal that his daughters have been seen on the beach with boys. Without further ado, he forbids the girls to leave the house from now on and starts looking for suitable marriage candidates for the eldest daughters before they finally fall into sin. But the sisters are not ready to surrender to their imposed fate just like that. Their desire for freedom is too great to be able to set limits to it. But the girls' rebellion is not without consequences, of course.

Mustang quickly brings back memories of Sofia Coppola's The Virgin Suicides. But although there are certainly some parallels, both dramaturgically and stylistically, director Deniz Gamze Ergüven was more inspired by Pasolini's The 120 Days of Sodom or The Escape from Alcatraz when staging her drama. And her own experiences from her youth have also been incorporated into the story. Sensitively and sometimes surprisingly humorously, she tells of the end of childhood innocence, the awakening of longings and the right to self-determination. The drama was filmed in İnebolu, a remote small town on the Black Sea coast. Ergüven deliberately chose this location in order to show not only a small community in which traditional structures still have enormous significance. The small town should also symbolize for the girls the end of the world they are trapped in. They want to escape the shackles placed on them by a male-dominated society and long to be allowed to live a self-determined life in the big city, like their teacher.

The film has some really nice moments where the girls' longings are symbolized in a pleasantly subtle way. Every now and then, as mentioned earlier, there are scenes that turn out to be surprisingly humorous, serving as a pleasant counterbalance to the dramatically somber moments that dominate the final act. Of course, the film does indict certain circumstances as far as the lives of women in Turkey are concerned. Nevertheless, Deniz Gamze Ergüven did not want to make a political film, not a cinematic indictment. Rather, she wanted to address some important issues in an almost fairytale-like, mystically beautiful, yet relentlessly intense and honest way. And the director has definitely succeeded in doing so.

However, it must also be said that despite a rather compact running time of just over 90 minutes, the production has some distinct lengths and, on the other hand, passes over some aspects of the story very quickly. Without giving too much away, there is a very dramatic scene in the final third that, if you as a viewer haven't been paying attention for a brief moment, leaves you momentarily a little perplexed. It's fitting, though, that this scene isn't boldly cannibalized. But by keeping it so brief, it also fails to spark any real emotional impact.

Nonetheless, Mustang has become a strong and important film that clearly conveys its important message without seeming too doctrinaire or accusatory. Absolutely worth watching for lovers of sophisticated arthouse dramas!

Cinema trailer for the movie "Mustang (Türkei/Frankreich/Deutschland 2015)"
Loading the player ...