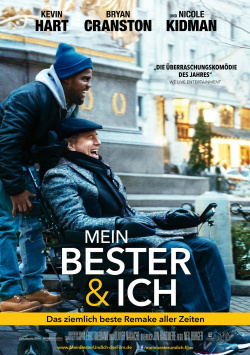 My Best Man and Me

Dell Scott (Kevin Hart), who has a criminal record, desperately needs confirmation that he has applied for a job. Otherwise, there will be no more financial assistance from the office. When he auditions to be a caregiver for paraplegic billionaire Philip Lacasse (Bryan Cranston), he does so knowing he won't be taken anyway. But his unconventional nature appeals to Philip. And against the explicit advice of his assistant Yvonne Pendleton (Nicole Kidman) he gives Dell the job. At the beginning, Dell seems absolutely overwhelmed with his new tasks. But gradually the unexpected happens: Dell grows into his job and something like a friendship develops between the two completely dissimilar men - a friendship that will change the lives of both forever.

The story sounds familiar to you? No wonder, because My Best Friend and I is the US remake of the hit French movie Pretty Best Friends. Now this version - not the first remake of the material, by the way - could be said to be completely unnecessary, not least because the original simply can't be topped. The statements of the US producers that they made the remake in order to dive deeper into the characters and thus gain new sides from them is, of course, absolute nonsense. Still, the film makes sense, at least for the American market. Because there, foreign language films are not dubbed, but at most subtitled. That such a film can become a blockbuster is thus almost impossible.

To retell the really beautiful story, based on true events, for an audience that is not familiar with it, is therefore absolutely understandable. Of course, it's a different story in this country, where the French film drew over 9 million viewers to theaters. So here, it's almost impossible not to compare the remake to the original. And that's where Bryan Cranston and Kevin Hart just don't do well. Does that make My Best Man and Me a bad movie? No, absolutely not. For connoisseurs and fans of the original, it is merely unnecessary. However, entertaining, funny and emotional is also this adaptation.

What succeeded in the direct comparison is that Dell in the U.S. version has a slightly different backstory written on the body. This one takes a typical Hollywood ending, but it still works very well. The ending that Philipp was given is also predictable Hollywood kitsch pure and simple. However, you can't help but smile in delight at this one either. Yes, the humor is a bit flat at times and Kevin Hart has nowhere near the charm of an Omar Sy. But for those who don't know the original or just can't get enough of the story, this objectively successful remake can also be thoroughly recommended: Worth seeing!