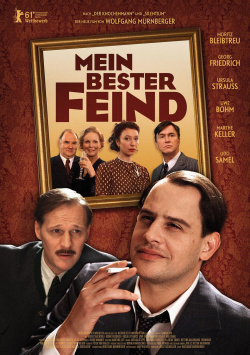 Vienna in 1938: Actually, the Jewish gallery owner's son Victor Kaufmann (Moritz Bleibtreu) and the worker Rudi (Georg Friedrich) have been best friends since childhood. Growing up almost like brothers, there seems to be nothing that could divide the two. But when Rudi joins the Nazis one day, this is the tragic end of a long friendship. For Rudi reveals to his new comrades that the Kaufmanns own a genuine Michelangelo. The painting is confiscated, the Kaufmanns are sent to a concentration camp and Rudi also grabs Victor's girlfriend Lena (Ursula Strauss). What Rudi doesn't know, however, is that the painting, which is to be presented to the Italian Duce in a politically important ceremony, is a fake. Victor, however, might know where the original is. And so Rudi gets his former best friend out of the concentration camp to bring him to Berlin. But when the plane crashes and only Victor and an injured Rudi survive, the cards are reshuffled.

Following the wonderful Wolf Haas adaptations Komm, süßer Tod, Silentium and Der Knochenmann, director Wolfgang Murnberger has once again chosen material in which to combine elements of drama, thriller and satirical comedy in Mein bester Feind. With a first-class ensemble of actors and a clever screenplay, Murnberger has succeeded in creating an entertaining cat-and-mouse game that is at times suspenseful, at times amusing and at other times extremely moving.

It is always difficult to wring more than just a profoundly tragic side from any subject matter surrounding the Second World War, around the fate of the Jews and the suffering in the concentration camps, without appearing disrespectful. Murnberger has succeeded in exactly this feat. On the one hand, he shows great respect, but nevertheless does not shy away from wanting to entertain the viewer well and also to make him laugh here and there. When Jude Victor slips into the Nazi uniform of his best enemy Rudi and assumes his identity, then this also has its very bitingly funny sides, about which one can be deliciously entertained as a viewer without any kind of guilty conscience.

Moritz Bleibtreu and Georg Friedrich are a very good team and especially the friendship between Victor and Rudi seems more than believable thanks to the good chemistry between the two. This is important, because the disappointment Victor feels when he sees Rudi in uniform for the first time and when he realizes that he has been betrayed by him, is only made tangible by the credibility of the friendship. But the rest of the cast, especially Uwe Bohm as Rudi's ice-cold superior, also make Mein bester Feind a piece of very entertaining acting cinema.

While his latest film isn't quite as biting and atmospheric as his last, Der Knochenmann. Still, Wolfgang Murnberger's Mein bester Feind can only be described as very accomplished. A cleverly constructed work that can be warmly recommended to lovers of more sophisticated entertainment. Worth seeing

Cinema trailer for the movie "My Best Enemy (Österreich/Luxemburg 2011)"
Loading the player ...