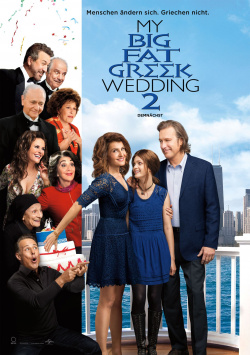 Unpack the Windex and tighten your necks, because the Portokalos family is back! After seventeen years, Gus (Michael Constantine) has seemingly finally come to terms with the fact that his beloved daughter Toula (Nia Vardalos) married Ian (John Corbett), not a Greek, but a Xenos. It's a mistake he definitely doesn't want his granddaughter Paris (Elena Kampouris) to repeat. And that's why Gus and the rest of the clan never miss an opportunity to meddle in the seventeen-year-old's life. She can't wait to go to a college that will take her as far away from her embarrassing family as possible. For Toula, this is an absolute horror, but she barely has time to worry about being separated from her baby anytime soon. Because in trying to prove that he's directly descended from Alexander the Great, Gus discovers that he and Maria (Lainie Kazan) aren't really married at all. And that, of course, needs to be changed as soon as possible. But Maria wants a proper proposal and a romantic wedding. Can stubborn Gus deliver? And must Toula now plan the next big Greek wedding?

14 years ago, the story of a young Greek woman and her chaotic family developed into a real surprise hit and is still one of the most successful romantic comedies of all time. The film was followed by a very short-lived sitcom version featuring most of the cast of the feature film, but it failed mercilessly with audiences. And other attempts by leading actress and screenwriter Nia Vardalos to build on the great success - for example with the comedy My Big Fat Greek Summer, which was very subtly titled in Germany - also failed. But now she's trying again, delivering the sequel to her Greek-American blockbuster comedy with My Big Fat Greek Wedding 2.

It becomes clear after just a few moments: this second installment takes no risks. Here is clearly checked off according to Schema F all that made the first film so successful. One looks for many new ideas here in vain. And so you would actually be inclined to dismiss this sequel, which no one really waited for, as an unimaginative pandering to the fans of the first movie. But then you find yourself not only smirking but laughing heartily at even the most repetitive gags, and that this reunion with the Portokalos clan is a hell of a lot of fun. Yes, the movie is actually a recycled version of the first part. And yes, the plot is extremely predictable and the characters don't seem to have evolved one bit in all these years.

And yet, it's hard to resist the film's concentrated charm. The production by Kirk Jones (Long Live Ned Devine) is like visiting old friends you haven't seen in a while. You can tell that some time has passed, and yet you immediately feel at home. And that's just nice - despite all the legitimate criticisms and clichés. However, it must also be said that My Big Fat Greek Wedding 2 is at its best when the whole family is involved in the action. The attempts of Toula and Ian to bring some more romance into their marriage seem a bit forced and can't be as touching as the tender approach between the two once was. The spark just doesn't really want to jump over anymore, which is why there are also some small lengths in these scenes that express as little emotion as the face of Lainie Kazan frozen by Botox.

But fortunately such moments are a real exception in an otherwise all-around successful sequel. If you're not expecting anything more than more of what worked so well in Part 1, and if you just want to spend some endearingly funny entertainment with charming characters, you definitely shouldn't miss this Greek wedding. Absolutely worth seeing!