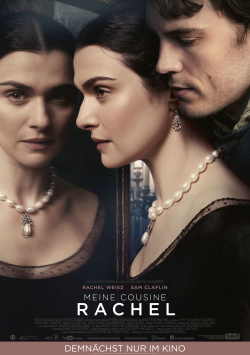 Philip (Sam Clafin) is distraught: his guardian, who was like a real father to him, has died. Based on the letters Ambrose sent him before his death, Philip is certain that he did not die of natural causes, but that his widow Rachel (Rachel Weisz) had a hand in it. When she arrives at his estate, Philip resolves to confront her and make her feel that he knows what she has done. But the woman who stands before him does not at all correspond to the picture Ambrose has drawn in his confused letters. On the contrary, Philip is so taken with the older woman that he quickly throws his suspicions to the wind. More and more he falls for Rachel, threatening to lose his own mind in the process.

My Cousin Rachel, based on the novel of the same name by Daphne du Maurier, was successfully filmed just one year after the book's publication in 1951, then starring Richard Burton and Olivia de Havilland. The beloved work of the author, who also wrote the literary models for the Hitchcock classics Rebecca and The Birds, then served as the template for a mini-series in the 1980s starring Geraldine Chaplin in the title role. Now director Roger Michell (Notting Hill) has taken on the material again. Although the ending of his film version is a little different from that of the novel, he doesn't really succeed in adding any new facets to the familiar story.

Which is not to say that his adaptation is inconsequential or boring. Michell manages very well to build a gripping atmosphere in which the question has she or has she not constantly hovers over the actions of the protagonists. In a web of obsession and insecurity, he leads Philip towards certain doom, though it's not always clear whether it's him or the charismatic Rachel who's responsible. And because he succeeds so well, the version of the finale he chooses also works really well - even if it is a tiny bit predictable in some ways.

The film is staged a little too slowly at times, while at other points it lacks the necessary depth. For example, it doesn't quite make sense why Philip, who was so filled with anger and hatred, drops all of that after only a few seconds in the presence of Rachel and seems to fall for her completely. It just happens too quickly and takes away so much of the story's credibility. Apart from that, however, almost everything is actually right: the set is very well done, the landscape shots are great and the actors can convince in almost every respect - especially Rachel Weisz, who plays so wonderfully ambiguous that as a viewer you never know whether to love her or be afraid of her.

Roger Michell has created a sweeping costume drama with light thriller elements over long stretches, which is not perfect, but which definitely manages one thing: to entertain its audience well and to captivate them until the end. And for that there is a deserved: Worth seeing!

Cinema trailer for the movie "My Cousin Rachel (USA/Großbritannien 2017)"
Loading the player ...