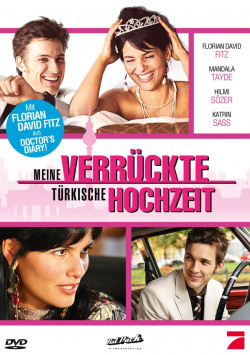 Film: Even as Götz (Florian David Fitz) makes his everyday way to work in his Kreuzberg record store, he is confronted with the not always problem-free clash of cultures; after all, the neighboring stores are all firmly in Turkish hands. But even if his colleague Horst (delicious: Charly Hübner) is constantly throwing around prejudices and conspiracy theories, the multi-cultural neighbourhood actually works quite well. Until Götz falls in love with Turk Aylin (Mandala Tayde). Her family, especially Papa Süleyman (Hilmi Sözer), doesn't like that at all. But since Götz has found his absolute dream woman in Aylin, he does everything in his power to earn the respect and thereby also the approval of her family. But this is harder than expected - especially when his mother (Katrin Saß) interferes in the already complicated relationship...

After his first broadcast "My crazy Turkish wedding" could not only convince critics but also the audience and was rewarded with several awards and nominations. After leading actor Florian David Fitz is currently in high demand after his series success "Doctor`s Diary" and movie hits like "Männerherzen" and of course "vincent will meer", a new edition of the TV movie had to be made. And if you haven't had the chance to watch this romantic comedy yet, you should do so now. Even though "My Crazy Turkish Wedding" has borrowed his ideas from films like "My Big fat Greek Wedding", which is openly admitted in the audio commentary, the whole thing has enough wit and charm to please lovers of German comedies.

Surely, the script doesn't use clichés sparingly. However, there are always moments that show that the makers are quite aware of the underlying problems of the story and take the whole thing quite seriously. Sure, in the end it's a light comedy with an obligatory happy ending. Of course, reality might look a little different in a few moments. But a heated discussion alone, which Götz leads in the last third with Aylin's family and in which it becomes clear that racism and prejudices do not only come from one direction, proves that the authors have understood an important point of the whole integration discussion, which is currently conducted so vehemently. The fact that in the end there is the message that we can all live peacefully together when ALL are open-minded and willing to approach each other is actually a very nice thing.

"My crazy Turkish wedding" may seem a bit naive here and there and some of the dialogues also seem a bit clichéd, but the bottom line is that the movie has its heart in the right place and the charming actors make sure that the multicultural love comedy knows how to entertain despite some minor weaknesses at the end. Recommended!

Picture + sound: The DVD presents the film in the pretty 5.1 Dolby Digital sound, which only slightly enhances the rather subtle tonal events. All in all, the picture and sound have been properly implemented and are at a pleasantly high level for a TV production. Good!

Extras: The DVD has some nice extras to offer. It starts with an audio commentary by leading actor Florian David Fitz, director Stefan Holtz, cameraman Bernhard Jasper and producer Christian Becker. The commentary is not only worth listening to because of the good-humoured participants, but primarily because it offers many very interesting details about the shoot. Here the viewer also learns that the first edited version of the film was almost two hours long, but had to be shortened by more than twenty minutes to fit into the ProSieben broadcasting scheme. These twenty minutes are now also to be seen in the bonus material on the DVD and also offer some quite worth seeing moments.

Finally there are still short scenes of the casting, a team film with more or less amusing outtakes, as well as a photo gallery, which shows Hilmi Sözers transformation in Süleyman. Overall for a TV production more than satisfactory extras.

Fazit: "Meine verrückte türkische Hochzeit" (My crazy Turkish wedding) could not only win good ratings after the TV broadcast, but also many prizes, including the Grimme Prize and the 3Sat Viewer Prize. Not least due to the success of leading actor Florian David Fitz in "Doctor's Diary" and "vincent will meer", the award-winning TV production has now made it to a beautiful new edition. The technical presentation is on a good level and also the bonus material is very nice.