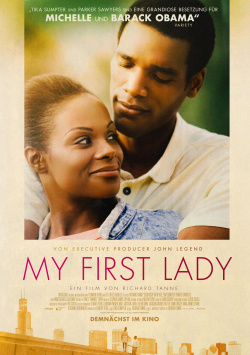 Even the world's most famous current married couple met on a first date at some point. That is, if Michelle Robinson (Tika Sumpter) had her way in 1989, meeting her colleague Barack Obama (Parker Sawyers) on a sunny Sunday in Chicago was not a date. After all, she actually categorically rules out romances between colleagues. But over the course of the day, Michelle and Barack slowly grow closer over long conversations, a visit to an exhibit and a Spike Lee movie. When she hears him speak at a community meeting, he impresses her not only with his charm, but also with his eloquence and charisma. But of course, Michelle has no idea on that day where else their path together will lead them.

Just before the end of his presidency and in the midst of the U.S. election campaign, one might actually think that a film about Barack Obama would be a very political, perhaps even manipulative work. Of course, Richard Tan's My First Lady has not become a critical reckoning with the politician or with Barack Obama the man. But neither is the romance truly political. Rather, this real-life Before Sunrise variation shows the beginning of what should be an ordinary love story, the only peculiarity of which is that it will lead to the White House years later. But the two young people the viewer meets here are far from that. They both have to fight for recognition and for their ideals - Michelle as a young black woman even more than the eloquent, charismatic Barack.

The film lives from its dialogues, which are sometimes more profound than one might have expected. It's about everyday things, but also about their political views, about dreams and fears. The whole thing seems very real and not at all put on, which is also thanks to the two excellently chosen main actors Parker Sawyers and Tika Sumpter. What is unfortunately completely lost in the German version is the more than convincing way in which both of them portray the younger versions of their real-life role models almost perfectly, not only in appearance but also vocally.

My First Lady is a beautiful film. Completely unspectacular, without an intrusive political agenda beating down on the viewer, carried only by atmospheric images of Chicago, stirring everyday dialogue and two very strong actors. Once again it proves that life really does write the most beautiful stories. You don't have to like Barack Obama or his politics to enjoy this likeable little film. And for that there is a clear: Worth seeing!