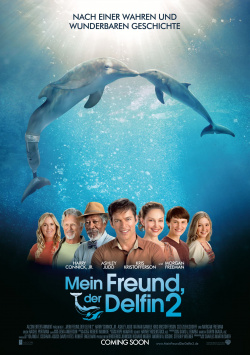 My Friend the Dolphin 2

Three years ago, the true story of Winter the female dolphin enchanted an audience of millions. The family film, My Friend the Dolphin, grossed nearly 100 million worldwide, enough to prompt producers and director Charles Martin Smith to make a sequel. Once again, this one is based on actual events surrounding the Clearwater Marine Aquarium. After Winter, who lost her tail to a crab trap, gets used to the unfamiliar prosthetic and life at the aquarium, the female dolphin has become an absolute crowd-pleaser. But when her mate dies, Winter is threatened with deportation. Because of their social behavior, dolphins in captivity must always be kept with conspecifics. Dr. Clasy Haskett (Harry Connick Jr.) and his team have little time to find a new mate for Winter. Now, of all times, Sawyer (Nathan Gamble), who once found Winter and became her closest caregiver, receives a tempting offer, but one that would require him to leave for several months. It's a difficult time, with only one small glimmer of hope: stranded dolphin cub Hope.

My Friend the Dolphin 2 is very nice family entertainment in its own right. The scenes starring the animals work particularly well. While pelican Rufus provides quite a few laughs with his surprising obsession with a giant tortoise, the scenes where Winter mourns her deceased companion really get to the heart. And when attempts are made to bring Winter and little Hope together, things even get really exciting for little viewers. Had Charles Martin Smith focused more on the animal stars, the sequel could have easily rivaled the first installment. Instead, however, there are countless lengthy dialogue sequences in which those involved often speak at an extra slow consternation pace as well. Some of these scenes are strictly speaking completely unnecessary and don't contribute to the story more than artificially dragging it out. As a result, the total running time comes to almost two hours, which is simply far too long for the young target audience.

While the last act sets a good pace and thus provides children with exciting as well as rousing entertainment, the action bobs along at an arguably ponderous pace, especially in the middle section. Long discussions about the financing of the aquarium with the board of directors or about whether the ethical rules should be circumvented in order to preserve the institution are likely to quickly lead to boredom, especially for younger viewers. Had these unnecessary dialogue scenes been streamlined, the film would have been just the right length at a crisp 90 minutes to keep its audience happy.

In contrast, the end credits are well done, showing real footage of the events that were the inspiration for the film's story. Here it becomes clear how much the makers, despite all dramaturgical liberties, were concerned with recreating the work in the aquarium as realistically as possible. Of course, there are no big rough edges in the process. All the people are nice and all the problems are somehow manageable. Here, reality is stylized into a fairy tale that offers well-behaved entertainment for the whole family. Enhanced by good actors like Morgan Freeman this second screen appearance of Winter is nice to look at - but nothing more. Who can overlook the lack of depth and the dramaturgical lengths and already liked the first part, a revisit to the Clearwater Marine Aquarium can be recommended. Worth seeing