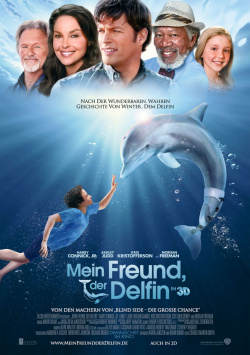 My Friend the Dolphin

Some stories sound so unbelievable that it seems like some creative mind in Hollywood must have made them up. My Friend the Dolphin tells just such a story. But the events underlying this beautiful family film are not pure fantasy, but fascinating and impressive reality, which has admittedly been mixed with a fair amount of fiction for the 3D adventure.

Sawyer (Nathan Gamble) is a shy loner who withdraws completely into his own world after his cousin, his closest confidant, is called up for military service. But when the boy finds a female dolphin caught in a crab trap on the beach one day and helps free the animal, his life changes abruptly. When he goes to the Clearwater Marine Hospital to check on the dolphin's condition, he meets Hazel (Cozi Zuehlsdorff), the daughter of Dr. Clay Haskett (Harry Connik Jr.), who takes him to the part of the marine veterinary hospital that is closed to visitors. There, Clay and his team see little chance for Winter, whose tail has been severely injured in the accident. When he notices how positively Winter reacts to Sawyer's presence, however, there is new reason for hope. But when Winter's tail has to be amputated, that glimmer of hope seems already dashed - until a dramatic accident involving Sawyer's family brings the unexpected twist...

In large part, Winter's story is actually true. The female dolphin, who plays herself in the film, had to have her tail amputated after a trap accident. Only an experimental and completely new prosthesis could save Winter from certain death. And this form of prosthesis, thanks to a flexible coating called Winter's Gel, now allows disabled people all over the world to live a somewhat easier life. Based on these facts, director Charles Martin Smith, with the help of Free Willy 2 writer Karen Janszen, has staged an entertaining family film that knows how to convince with beautiful underwater shots, a touching story and good actors.

Shot in Winter`s real quarters, which have merely been renamed for the film, the child actors Nathan Gamble and Cozi Zuehlsdorff in particular deliver performances that are appropriate for the target group. It's easy for little moviegoers to identify with Sawyer and Hazel, which is achieved by the refreshingly uninhibited acting of the two. The two are supported by some very good supporting actors, which include Kris Kristofferson and Harry Connick Jr. as well as Ashley Judd and Morgen Freeman, who have done several films together. Although Judd and Freeman only have a few scenes together here, they have great chemistry together, though children will hardly notice and couldn't care less.

For them, the scenes with Winter are primarily interesting. And they are very nicely staged. Although at the latest since the documentary The Cove the sight of dolphins not living in freedom or even appearing in films brings with it an unpleasant aftertaste, in this particular case the background should not be forgotten. Winter has not been captured, but rescued by humans and would have died long ago in the open sea (Good, without humans the trap accident would not have happened in the first place).

The 3D effect then really only comes into its own in the scenes where Winter is the focus. In most moments, however, it is completely superfluous. But that doesn't apply to the movie itself. Even if there are some little lenghts here and there, which might be unpleasant for younger viewers, and even if some aspects of the production are too moralistic, in the end My Friend the Dolphin is a really worth seeing family movie, which can easily compete with similar works like the first Free Willy. Worth seeing

Cinema trailer for the movie "My Friend the Dolphin (USA 2011)"
Loading the player ...