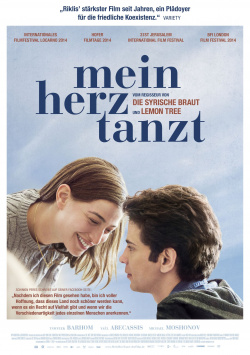 Eyad's (Tawfeek Barhom) parents are enormously proud because their son has become the first and only Palestinian to date to be accepted into an elite school in Jerusalem. Eyad knows it won't be easy for him there. But he wants to do everything he can to fit in and integrate into Israeli society. Nevertheless, he remains an outsider, which connects him with Yonatan (Michael Moshonov), who is in a wheelchair due to an incurable muscle paralysis. A deep friendship quickly develops between the two, which also gives Eyad the strength he needs to endure everyday discrimination. When he falls for the beautiful Naomi (Danielle Kitzis), happiness seems to have triumphed over all prejudice and hatred. But unfortunately for Eyad, the fairy tale is soon over and he must face reality - a reality that will require him to make a grave decision...

My Heart Dances is truly not the first film to deal with the conflict between Israel and Palestine. Especially in the recent past, there have been many dramas and documentaries that have attempted to approach this difficult subject and offer something like hope for a better future - or to show why it is unlikely that this conflict will be resolved in the near future. Eran Riklis, one of the most important Israeli filmmakers of the present, does not address the issue for the first time in his new work. But rarely before has the conflict been treated with such an overall life-affirming lightness and refreshing humor as it is in My Heart Dances.

The film is hardly political, but tells a very personal story based on the true story of Sayed Kashua, a Haaretz columnist living in the US. It's a coming-of-age story, a tender romance and a touching tale of an unlikely friendship that knows no prejudice and no boundaries. It may be that it's not as deep and meaningful as other films that deal more dramatically with the effects of conflict. But it is precisely by telling the first half of the story in a pleasantly light, amusing and heartfelt way that Riklis reaches out to viewers who might otherwise find this material just too heavy and don't want to deal with such conflicts dominating the everyday news in the cinema as well.

Towards the end, however, the tone becomes more serious here as well. After Naomi is taken out of school by her parents because they will never tolerate a relationship between their daughter and a Palestinian, Eyad realizes that despite his intellectual potential, he will never be accepted here simply because of his heritage. The decision he has to make at the end raises interesting questions about finding identity and discrimination. The ending feels a little half-baked and as a viewer, you can't quite understand Eyad's decision as it's sort of made in passing compared to other aspects of the story. Still, the story as a whole works very well.

Because Riklis has managed the feat of directing a feel-good film that doesn't indulge in any false illusions. But instead of lapsing into stifling consternation or striking recriminations, he consistently tells his little story to its conclusion. With charming actors and many quite wonderful moments, minor dramaturgical weaknesses are easily compensated for. The result is a light, enchanting arthouse gem that proves that even heavy topics can be staged in an entertaining way and that the audience can leave the cinema with a happy smile on their faces despite a certain sadness. And for that there is a very clear: Absolutely worth seeing!

Cinema trailer for the movie "My Heart Dances (Israel/Deutschland/Frankreich 2014)"
Loading the player ...