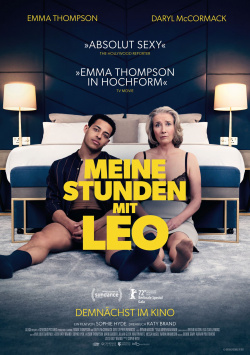 My Hours with Leo

Nancy Stokes (Emma Thompson) has a dream: for once in her life, she wants to experience sex that completely fulfills her. The widowed teacher had never had an orgasm. Now, after a monotonous marriage and after the end of her professional life, she wants to make up for what she has been denied so far. The callboy Leo Grande (Daryl McCormack) is supposed to help her. At their first meeting in a hotel room outside the city, Nancy is anything but relaxed. The fact that the charming and articulate Leo wants to talk so openly about her sexual desires doesn't exactly make things easier. Nevertheless, she enjoys the rendezvous and books Leo for another meeting a short time later...

"My Hours with Leo" is for long stretches a two-person play with a chamber-play-like character. Something like this usually works very well in the theater, but can quickly seem a bit exhausting in the cinema. That the whole thing works really well in this case, however, has several reasons. For one thing, there's the script by British comedian Katy Brand, which manages the balancing act between comedy and drama very well. The dialogues are excellently written. Through them, the two main characters reveal themselves, break down their emotional walls or abruptly pull them back up. This brings us to the second reason for the success of this film: Emma Thompson and Daryl McCormack.

The two deliver a wonderful performance here: Emma Thompson as a woman who wants to fulfill her desires, but can't really get out of her skin. And Daryl McCormack as a charming callboy who perfectly hides his own dreams and fears behind his smile and his open way of dealing with the sexual needs of his clients. In the course of the story, both of them have to let down their protective shields, but this has completely different effects. This is not only superbly acted, but also extremely engagingly directed.

"My Hours with Leo" is an exceedingly funny film, but at the same time thought-provoking. It is an engaging plea for self-acceptance, living out suppressed desire, and acknowledging one's weaknesses as part of one's self. It's a film that proves that sometimes all it takes is good dialogue and first-rate actors to make for great entertainment cinema. A very clear case of: Absolutely worth seeing!

Cinema trailer for the movie "My Hours with Leo (Großbritannien 2022)"
Loading the player ...