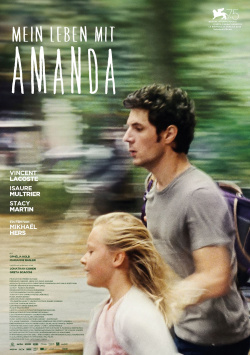 My Life with Amanda

It's summer in Paris. Young David (Vincent Lacoste) enjoys his carefree single life, which he finances with various jobs. Only rarely does he have to take on anything like responsibility when he takes care of his niece Amanda (Isaure Multrier). And to make this laid-back life even more perfect, David also meets his new neighbor L&eacute;na (Stacy Martin), with whom he begins a beautiful summer romance. But all it takes is a moment and David's life changes abruptly: his sister is killed in a brutal attack and David is now forced to decide whether he will take sole responsibility for Amanda. He barely has time to cope with his own grief, wanting to be there for the seven-year-old girl as best he can. But is he really capable of taking on something like a father role?

As he did most recently in his drama This Summer Feeling, director Mikha&euml;l Hers shows in My Life with Amanda how the unexpected death of someone changes the lives of their loved ones. But although the subject matter is similar, the approach is quite different. True, a certain emotional restraint again dominates Hers direction. But this time he doesn't shy away from the really big emotions, which he can build up, however, without exploiting certain triggering elements. This becomes especially impressive in the scene where David arrives at the place where his sister was killed moments before. It is precisely because Hers cuts to the next scene here in time that this moment takes on tremendous emotional power.

He manages this feat again and again, which in the end means that there is unlikely to be a dry eye in the audience. Now this may sound like My Life with Amanda is a very sad, heavy film. Yes, it is of course very sad in places, but overall it is a very, very beautiful, delightfully light film that conveys one thing above all: Hope and love. Even if the tears flow a few times, you leave the cinema with a happy smile on your face.

My Life with Amanda is a small film that evokes quite big emotions. Magnificently acted by Vincent Lacoste and newcomer Isaure Multrier, the drama tells a moving story that, despite its deep sadness, doesn't drag the viewer down, but gives them a high of hope. A wonderful ode to life and to going through hard times together in order to be able to see the beauty of life again at the end of the tunnel. Or in short: Simply a beautiful film that more than deserves an Absolutely Worth Seeing!

Cinema trailer for the movie "My Life with Amanda (Frankreich 2018)"
Loading the player ...